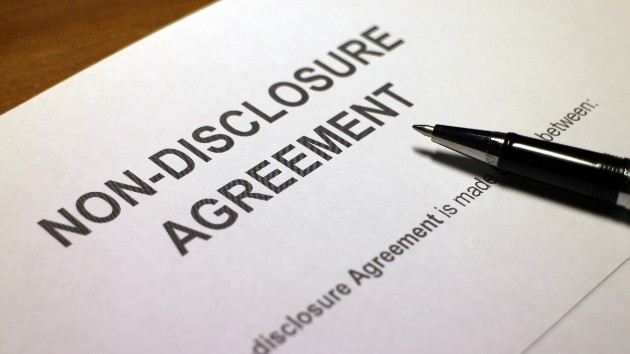 Hailshadow/iStock(WASHINGTON) — Democratic presidential candidate Mike Bloomberg told ABC News this week he will not take any steps to release women who have signed confidentiality agreements with his company to speak publicly about past allegations that the former New York City mayor fostered a hostile work environment for some female employees. “You can’t just walk away from it,” Bloomberg said. “They’re legal agreements, and for all I know the other side wouldn’t want to get out of it.” Last month, ABC News reported on several lawsuits in which Bloomberg was accused of making crude remarks in the 1990s and of allegedly fostering an uncomfortable environment for women to work — allegations Bloomberg has denied. Three cases against the company remain active. ABC News has spoken with several women who expressed interest in telling their stories who were subject to confidentiality agreements, but said they feared the prospect of facing retribution from the company for speaking out. The report prompted Sen. Elizabeth Warren, D-Mass., a rival presidential candidate, last month to criticize the billionaire media mogul’s use of non-disclosure agreements as “a way for people to hide bad things they’ve done.” Warren told reporters in Iowa “women should be able to speak” and said “when women raise concerns like this, we have to pay attention. We have to listen to them, and if Michael Bloomberg has made comments like this, then he has to answer for them.” Bloomberg offered a terse reply when asked about Warren’s remarks by reporters Wednesday night: “Maybe the senator should worry about herself and I’ll worry about myself.” Bloomberg has stepped away from his role at the helm of his company, but maintains a large ownership stake. He said his company has built an enviable record of gender equity. “We’re not perfect,” he told a small gathering or reporters Wednesday. “But we have very low attrition and I think we treat our employees — no matter what their gender or age or ethnicity is — as well as any company. We can always do better — but we keep looking for better ways to make our employees get better benefits because that’s the way you attract good people and I can parade out a whole bunch of any group that you want that will tell you it’s a great place to work.” Since his late entry into the campaign for the Democratic nomination, Bloomberg has been touting his record as a self-made business success. On the campaign trail this week, Bloomberg touted his company’s progressive record, consistently saying he has fostered the growth and promotion of everyone within his company. He has drawn on that record to build his 2020 platform, recently unveiling a plan to tackle the issue of maternal health. It was in the midst of a three-state jobs creation tour that he addressed the question of the non-disclosure agreement. It is a touchy subject. Amidst a #MeToo movement that questioned the practice of silencing victims, critics say Bloomberg owes his former employees the opportunity to share their stories. “If Mr. Bloomberg is running for president, I think the public needs to know what actually happened in this business,” said Bonnie Josephs, a lawyer whose former client, Sekiko Sakai, filed a lawsuit against Bloomberg’s company in the 1990s. Sakai accused Bloomberg of making sexually explicit and derogatory statements to and about women in the workplace. In December, a company spokesman told ABC News that the company rarely settles disputes, preferring to take them to court. But Sakai’s case is one of at least five the company has settled in the past 25 years. She is now bound by a confidentiality agreement. ABC News has spoken with several women who expressed interest in telling their stories who were subject to confidentiality agreements, but said they feared the prospect of facing retribution from the company for speaking out. There are mixed views on whether the agreements help or hinder accusers. Prominent harassment and discrimination attorney Gloria Allred says confidentiality agreements generally are in the best interest of victims, not perpetrators. Allred has represented women in several high-profile sexual assault and harassment cases. She told ABC News confidentiality agreements are a negotiation and can be accepted or declined. “It’s a voluntary process,” Allred said. “It’s up to the victim whether she wants to try to have a confidential settlement or not. Nobody silences her, nobody forces her to do it.” But with Bloomberg’s bid to become president, some who served as senior executives at his company have said they would have more to say if released from their agreements. They told ABC News they did not want to see this part of his record hidden. Attorney Donna Clancy represents clients in the three current cases against the Bloomberg company alleging sexual harassment, wrongful termination, and age and gender discrimination — all mentioning within their claims a culture that stemmed from past allegations about the candidate’s own conduct. The Bloomberg firm has denied the allegation in court filings. Clancy says the company is using the agreements to protect its reputation. “I think keeping secrecy is a value to them and I think that goes against what we are trying to do to create awareness of the changes that need to be made so that there isn’t sexual harassment,” Clancy said.Copyright © 2020, ABC Audio. All rights reserved.

Jan. 6 committee pushes back after Pence says he won’t testify