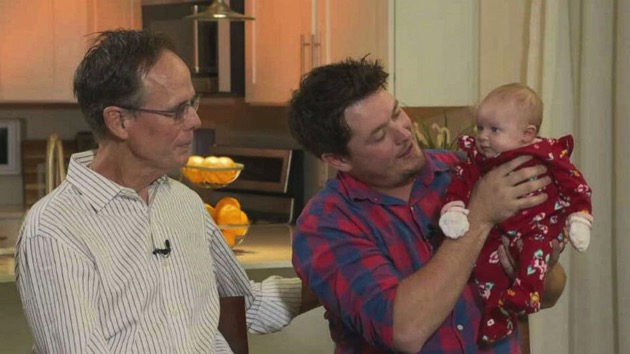 Fiance Shane Carey, along with his father, holds he and Heidi Broussard’s baby, Margot Carey, during an interview with ABC News on Jan. 8, 2020. (ABC News)(AUSTIN, Texas) — The fiance of a Texas woman who was allegedly killed in a plot to steal their baby said he’s still in disbelief that someone so close to them may have been involved.”She deserves more. She deserves way more,” Heidi Broussard’s fiance, Shane Carey, told ABC News in an exclusive interview airing on Good Morning America Thursday. “I’m waiting for that text message, like, ‘Hey sweetie, how we doing?’ … Just waiting to hear her voice. I still don’t believe it. I just don’t believe it. It’s really not real.”Broussard, 33, and the couple’s infant daughter, Margot, had been missing for a week before the young woman was found strangled to death in the trunk of the car of her close friend, Magen Fieramusca, on Dec. 19, according to officials.Fieramusca was charged with kidnapping in connection with the case, and police believe she may have abducted Broussard in a plot to take baby Margot as her own child.Investigators said Fieramusca had allegedly been acting like she was pregnant and telling people that she was expecting a child. Authorities are now trying to determine whether she was pregnant at all.Margot was found alive and was reunited with her family last month, but those closest to her are still searching for answers.”I want to look at her straight in the eyes and ask her why?” Carey said of Fieramusca. “That’s all I want to say. There’s no reason for any of this. I believe somebody talked her into it. I mean, from knowing Magen, I would never imagine it.””I don’t know what happened. … Heidi is way stronger than Magen. There has to be a second person. There is no way Magen was by herself,” he added.Carey told police that on Dec. 8 or 9, Broussard said Fieramusca delivered a baby girl, according to court documents. Carey said he had seen her visibly pregnant, the documents said.Fieramusca’s ex-boyfriend, Christopher Green, told investigators that “he never saw Magen Fieramusca’s bare stomach during the pregnancy,” but he believed she was pregnant with his child, according to the documents.The two still lived together, although they were broken up, the documents said.Fieramusca later told investigators that she went into labor on Dec. 12 and went to a Houston-area birthing center, but she could not remember the center’s name, according to the arrest affidavit.Shen told investigators she brought her baby home on Dec. 12, the affidavit said.When investigators spoke with Green, they showed him a flyer of missing baby Margot — and Green replied, “That’s the baby at my house,” according to an arrest affidavit.Investigators say they went to Fieramusca’s home where they smelled the “unmistakable odor of decomposing flesh” coming from the trunk of Fieramusca’s Nissan Versa.She was taken into custody on two charges of kidnapping and one count of tampering with a human corpse. Her first court appearance is set for next month.Carey, Broussard’s fiance, expressed frustration over the way the case was unfolding and questioned why Fieramusca hadn’t been charged with murder.”I guess it’s tampering with evidence, [but] how is no one charged [with murder]? … There has to be someone charged,” Carey said. “I don’t know why this happened. She had my baby in her room supposedly. So it had to be her. … She had to be involved.”For now, Carey said he’s trying to stay strong for baby Margot. He’s also preparing to launch a foundation in Heidi’s memory called “Heidi and Shane’s Family Fund,” to support families who have suffered traumatic events. Copyright © 2020, ABC Audio. All rights reserved.