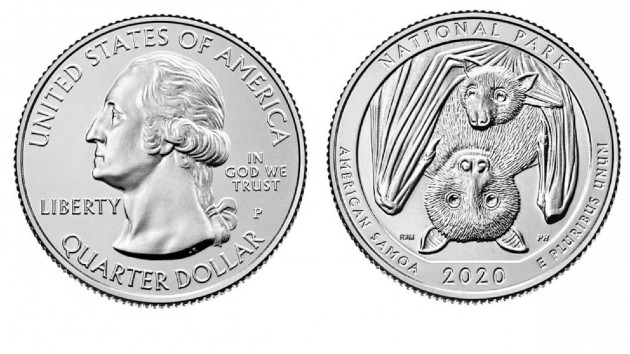 United States Mint (NEW YORK) — Keep an eye out for a shiny new quarter with a raised image of fruit bats and be careful not to let the coin fly out of your wallet or pocket. As part of the U.S. Mint’s America the Beautiful Quarters Program, the new National Parks quarter dollar celebrates American Samoa and features a mother fruit bat and her pup hanging upside down.The first special edition coin of the new year will be released on Feb. 3. “The image evokes the remarkable care and energy that this species puts into their offspring,” the U.S. Mint wrote in its description. “The design is intended to promote awareness to the species’ threatened status due to habitat loss and commercial hunting. The National Park of American Samoa is the only park in the United States that is home to the Samoan fruit bat.” Since 2010, the U.S. Mint has issued 56 quarter-dollar coins that feature designs which depict national parks and other national sites as part of its America the Beautiful Quarters Program.After the fruit bat quarter, there will be four more coins made by the U.S. Mint to represent other national parks.A coin that’s embossed with an image of Weir Farm National Historic Site in Connecticut will debut in April, Salt River Bay National Historical Park and Ecological Preserve in the U.S. Virgin Islands will be released in June, Marsh-Billings-Rockefeller National Historical Park in Vermont will be released at the end of August and a Tallgrass Prairie National Preserve in Kansas coin will be the final specialty 25 cent piece of the 2020 collection in November. Copyright © 2020, ABC Audio. All rights reserved.

Sen. Paul does not unequivocally say 2020 election wasn’t stolen
Station wagons are back. And they’re faster than ever
Yemen, on brink of collapse, may suffer further after Trump decision on Ansar Allah
Turbulent week of weather ahead with 3 different storms tracking across US
Coronavirus live updates: University of Michigan pauses all sports after positive tests
Biden’s first 100 days live updates: State Dept. condemns arrests, repression in Russia