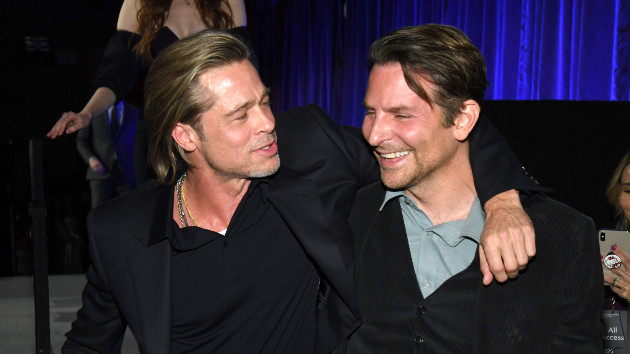 Entertainment Tonight reports pair, who haven’t worked together onscreen, hugged warmly after Cooper’s introduction of the Once Upon a Time … In Hollywood winner.

“Bradley just put his daughter to bed and rushed over here to do this,” Pitt said, referring to Lea, Cooper’s two-year-old daughter. “He’s a sweetheart.”

Pitt then said of Cooper, “I got sober because of this guy and every day has been happier ever since. I love you and I thank you.”

Cooper, now 46, once told The Hollywood Reporter that he stopped drinking at 29, fearing booze would “ruin” his life.

Pitt, 56, admitted to going to Alcoholics Anonymous after his ex, Angelina Jolie, filed for divorce in 2016.He told GQ Style that prior to that, he couldn’t “remember a day since I got out of college where I wasn’t boozing or had a spliff, or something.””I’m really, really happy to be done with all of that,” Brad admitted.