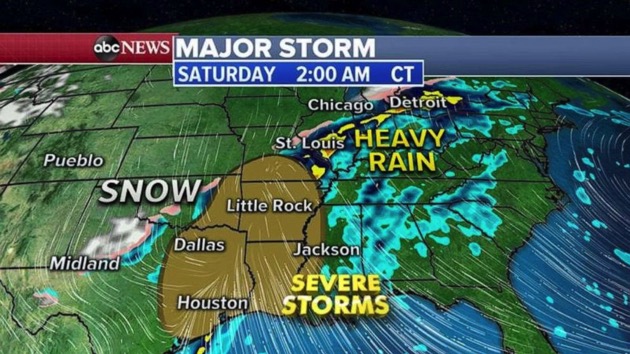 ABC News(NEW YORK) — Light rain is falling on frozen roads in Wisconsin Thursday morning, creating extremely dangerous driving conditions and closing an interstate. The Wisconsin Department of Transportation is urging people to stay off the roads from Tomah to La Crosse. The La Crosse police said there are “reports of multiple traffic lights struck and knocked down in the city.” “If you do not have to drive please stay off the roads,” the police tweeted.Meanwhile, a major storm is forming in the central U.S., threatening to bring tornadoes and flooding to the south and heavy snow to the north. On Friday afternoon and night, tornadoes and damaging winds are possible in Dallas, Little Rock, Arkansas and Houston, even stretching to Jackson, Mississippi.Further north, flash flooding is expected from Oklahoma to Michigan. Flood watches have been issued for nine states. By Saturday afternoon and evening, severe weather with a threat for tornadoes and damaging winds will move east into New Orleans; Birmingham, Alabama; Atlanta and Tallahassee, Florida.Further north, heavy rain will hit the Ohio Valley.Heavy snow could develop from Missouri to near Chicago and into Michigan. Some areas could see as much as 4 to 6 inches of rain, and flash flooding could be a significant threat. Some areas from northern Oklahoma to Michigan could see snow ranging from 6 to 12 inches. A foot of snow is expected from Wisconsin to Michigan, with lower amounts in Oklahoma and Iowa.Copyright © 2020, ABC Audio. All rights reserved.