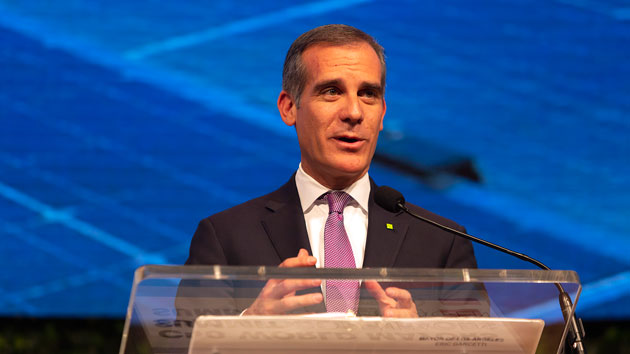 Ole Jensen/Getty Images(LOS ANGELES) — Los Angeles Mayor Eric Garcetti endorsed former Vice President Joe Biden Thursday afternoon.In a release from the campaign, Garcetti calls Biden a “close, personal friend,” and credited Biden with helping the second-largest city in the country make progress on issues like climate change, and increasing the minimum wage.“Democrats are blessed to have such an extraordinary field of candidates, but I will never forget what Joe Biden has done for my city and our nation. We need Joe Biden to bring our nation and world together during these most divided and dangerous times. I know that from day one, he will heal our nation, repair our relationships abroad and get things done — and will be a true partner in solving the national homelessness crisis.”Along with his endorsement, Garcetti will also serve as a national campaign co-chair for Biden.Garcetti previously considered entering the 2020 race before announcing in January 2019 he would remain in his role as mayor.”This is where I want to be, and this is a place where we have so much exciting work to finish,” Garcetti said at a press conference at Los Angeles City Hall last January. “I have decided not to throw my hat in the ring to run for President in 2020.”During a stop at a Los Angeles taco shop with Garcetti back in May, the former vice president revealed he spoke with Garcetti after he announced he would not join the race.“I called him and I said ‘I really have mixed emotions about this.’ The reason is, number one, I think he’s one of the most qualified people in the country, one of the best mayors in the country, he’s done incredibly innovative things but I also said ‘I’m glad you’re not running because I’m planning on running. I wouldn’t want to, no seriously, I wouldn’t want to run against you’,” Biden told reporters in May.Throughout the 2020 primary, the Garcetti met with 2020 competitors, including Biden and former South Bend, Ind. Mayor Pete Buttigieg in May, and billionaire Michael Bloomberg earlier this week. Copyright © 2020, ABC Audio. All rights reserved.