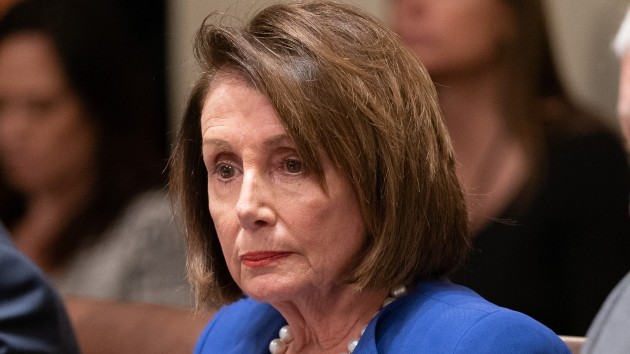 Official White House Photo by Shealah Craighead(WASHINGTON) — House Speaker Nancy Pelosi on Thursday faced new pressure from Democrats to deliver the House impeachment articles to the Senate in order to begin President Donald Trump’s impeachment trial, after a weeks-long standoff with Senate Majority Leader Mitch McConnell over the terms of the Senate proceedings. In her weekly news conference Thursday morning, Pelosi maintained her refusal to transmit the impeachment articles to the Senate, but suggested she is preparing to do so in the near future. “Not indefinitely, I’ll send them over when I’m ready,” Pelosi said, adding that it would “probably be soon.” When asked about Democratic arguments that the impeachment, passed three weeks ago, was urgent, she replied: “I think we should move smartly and strategically.” “We need to see the arena in which we are sending our managers. Is that too much to ask?” she said, referring to the House Democratic managers who would present the case against Trump. “I hear different things. I hear that they might want to dismiss,” she said of Senate Republicans and Senate Majority Leader Mitch McConnell. Pelosi pushed back on McConnell’s claims that the rules for a Trump trial would mirror President Bill Clinton’s trial, noting that was reached in a unanimous agreement while McConnell says Republicans have the votes to proceed without any Democratic support. “At some point we would hope that we would see from them what the terms of engagement will be. We are ready, we are proud of our defense of the Constitution of the United States,” she said. McConnell has refused to negotiate with Pelosi over witnesses, saying that the Senate would make a determination on adding additional evidence after opening arguments and questions from senators.A growing number of Senate Democrats called on Pelosi to name impeachment managers to deliver the charges to the Senate, arguing that it would renew focus on Senate Republicans and any votes against subpoenaing witnesses and documents. “We are reaching a point where the articles of impeachment should be sent,” Sen. Richard Blumenthal, D-Conn., told reporters Wednesday. “If we’re going to do it, she should send them over,” Sen. Dianne Feinstein, D-Calif., said. “I don’t see what good delay does.”On Thursday, one of Pelosi’s top lieutenants, House Armed Services Committee Chairman Adam Smith, D-Wash., appeared to break ranks with House leaders and call on Pelosi to send over the articles. “At the end of the day like we control it in the House, Mitch McConnell controls it in the Senate. I think it was perfectly advisable for them to leverage that, get a better deal. At this point doesn’t look like that’s going to happen,” he said in an appearance on CNN. “And yes, I think it is time to send the impeachment to the Senate and let Mitch McConnell be responsible for the fairness of the trial.” Smith completely reversed himself hours later on Twitter, instead saying that he supported Pelosi’s position.

I am concerned that Senator McConnell won’t have a fair trial and I am with the Speaker that we should do everything we can to ensure he does. Ultimately, I do want the articles sent to the Senate for the very simple reason that I want the impeachment process to go forward.

On the Senate floor Thursday morning, before Pelosi spoke, McConnell read quotes from Democratic senators who have expressed impatience over the stalled articles of impeachment.

Quoting Feinstein, McConnell said Pelosi has united senators against her. “The Speaker of the House has managed to do the impossible: she’s created this growing bipartisan unity here in the Senate in opposition to her own reckless behavior,” McConnell said. “Senators may not agree on much, but it appears most of us still recognize a threat to our institution when we see one,” he added.