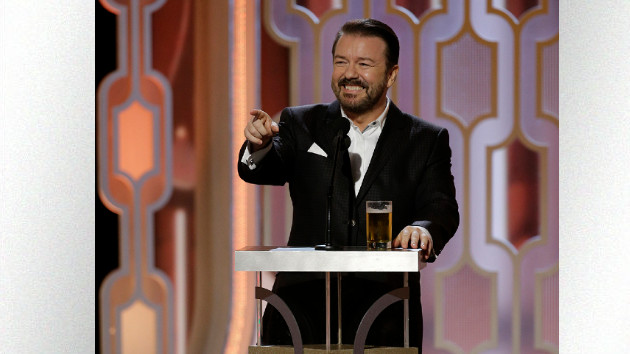 Paul Drinkwater/NBC(LONDON) — (NOTE LANGUAGE) Days after Ricky Gervais dropped jaws with his fearless monologue as host of the Golden Globes, ABC Entertainment president Karey Burke made the announcement that the Oscars will go hostless for the second year in a row.

Whether it was because of his monologue or not, Gervais is having a laugh about the news — with a single emoji, the crying laughing one.

Kevin Hart stepped down as host last year amid controversy over old tweets.

The Office co-creator went viral with his opening to Sunday’s awards show, which not only took swings at Hollywood’s links to Harvey Weinstein and well-connected pedophile Jeffrey Epstein, but also at the show’s potential winners. “…[D]on’t use it as a platform to make a political speech,” Gervais said. “You’re in no position to lecture the public about anything. You know nothing about the real world. Most of you spent less time in school than Greta Thunberg.”

Some stars, like Michelle Williams and Patricia Arquette ignored his advice.

The jokes earned Gervais new fans on the political right, and absurdly, accusations he was “right wing” by those he offended on the Left.

“How the f–k can teasing huge corporations, and the richest, most privileged people in the world be considered right wing?” he asked his 13.9 million Twitter followers.

Gervais has always been known as an equal opportunity offender, he clarified on Twitter Wednesday.

“I didn’t roast Hollywood for being a bunch of liberals. I myself am a liberal. …I roasted them for wearing their liberalism like a medal. I’m such a…liberal, I can’t even really hate them for it. But my job is to take the pi**. I did that,” he added.The 92nd Academy Awards will be held on Sunday, February 9 on ABC.

Biden inauguration live updates: Biden to give remarks before leaving for Washington
Democrats plan to launch impeachment trial by end of week, sources say
Washington state taps Starbucks, Microsoft and Costco to aid vaccine efforts
POLL: 9 in 10 say pandemic not controlled; two-thirds intend to vaccinate
It’s time to light the lights! ‘The Muppet Show’ coming to Disney+
Ice-T reflects on how he went from robbing banks as troubled youth to starring on ‘Law & Order: SVU’