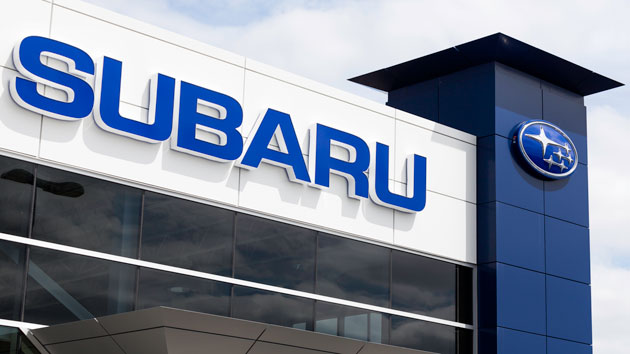 iStock(NEW YORK) — Subaru is recalling nearly 500,000 vehicles as part of the still-ongoing Takata air bag scandal that is impacting tens of millions of vehicles in the U.S.The company is recalling 497,922 cars for faulty air bags, Subaru confirmed to ABC News on Thursday.Subaru states on its website that the recall “only relates to the passenger-side front airbag in certain Subaru vehicles and does not affect our driver-side front airbags, which were not equipped with a Takata inflator.””Therefore, if your vehicle requires a recall service, we recommend that occupants not use the front passenger seat until the repair is performed,” the website adds.The site also shares a special message from Morgan Freeman warning those who could be impacted by the recall to take action, because “it could save your life.”Subaru said it is notifying car owners if their vehicle is part of the recall. Customers can also find out if their vehicle is impacted by the recall on Subaru’s website using their Vehicle Identification Number or just the model year and make.The National Highway Traffic Safety Administration revealed Wednesday that an additional 10 million Takata air bag inflators that were being used by more than a dozen car companies in the U.S. were being recalled.The latest batch of airbag inflators recalled, made with ammonium nitrate, can cause a “rupture” according to documents shared on the NHTSA’s website Wednesday. This explosion “may cause metal fragments to pass through the air bag and into the vehicle interior at high speed, which may result in injury or death to vehicle occupants.”The new recall is for Takata air bags that were used to replace to older Takata air bags that were also being recalled.Takata, which filed for bankruptcy in 2017, is already at the center of one of the largest auto industry recalls in history. The NHTSA estimates roughly 41.6 million vehicles with defective Takata air bags are under recall, according to the NHTSA.   Copyright © 2020, ABC Audio. All rights reserved.