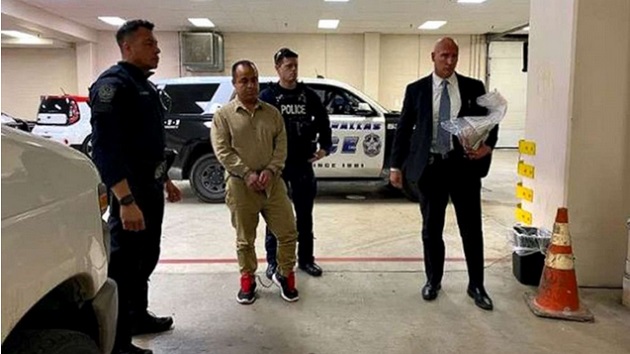 Dallas Police Dept.(DALLAS) — A suspected serial killer has been extradited to Dallas after spending over a decade as a fugitive in Mexico, prosecutors said.Jose Sifuentes, 42, is accused of capital murder in the sexually motivated slayings of Maria De Lourdes Perales, Erica Olivia Hernandez and Veronica Hernandez, according to the Dallas County District Attorney’s Office.All three were young, Latina women killed between 1998 and 2003 in Dallas County, Assistant District Attorney Leighton D’Antoni said. They all worked at “taxi clubs,” and it’s believed Sifuentes encountered all three in that setting, D’Antoni said.”In Dallas back in the ’80s and ’90s, they had these places commonly referred to as ‘taxi clubs’ where usually Hispanics would kind of hang out,” D’Antoni told ABC News on Friday. “You’d pay for your drinks, you could also pay the waitresses money to basically just hang out with you and dance.”Sifuentes was arrested in 2003 for the murder of Veronica Hernandez, the only known victim at the time, and his DNA was collected, prosecutors said.But Sifuentes posted bond and fled to Mexico.More DNA evidence was found in the years Sifuentes was in Mexico, prosecutors said, and in 2017 indictments were returned against him for the capital murders of Maria De Lourdes Perales and Erica Olivia Hernandez.Prosecutors said they then submitted an application to the Justice Department for an international provisional arrest warrant, and in January 2019, a judge in Mexico issued a warrant. This gave Mexican law enforcement authorization to arrest him to be extradited.In April 2019, prosecutors said Sifuentes was arrested in San Vicente de Gonzalez, Nuevo Leon, Mexico — about 700 miles south of Dallas.On Wednesday, FBI agents in Mexico City transported Sifuentes to Dallas, where he was booked into the Dallas County Jail, the district attorney’s office said Thursday.D’Antoni said it’s possible there are more victims.”Individuals who engage in repeated similar sexually violent homicidal activity against women tend to have more victims than law enforcement is aware of,” D’Antoni said in a statement Thursday. “I want to know if there are any other victims. If you are aware of any unsolved murders of young Latina women who may have worked as ‘meseras’ in ‘taxi clubs’ between 1993-2003, please contact either the Dallas Police Department’s SIU or the Dallas County District Attorney’s Cold Case (SAKI) Team.”Sifuentes is due in court Tuesday for an initial appearance, D’Antoni said. It was not immediately clear if he had an attorney.Copyright © 2020, ABC Audio. All rights reserved.