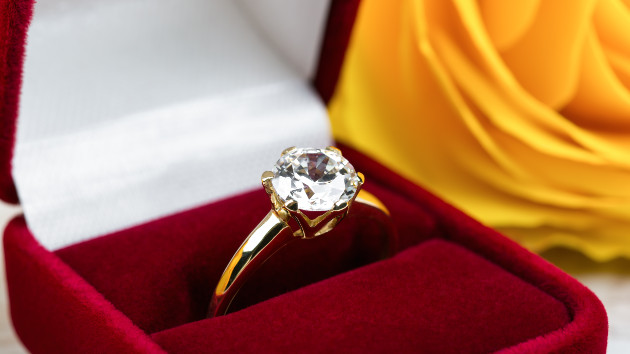 iStock/D_Zheleva(LOS ANGELES) — If you thought the way you popped the question to your significant other was creative, shelve that story: a guy named Lee Loechler has you beat.

He spent months “hacking” his cardiologist girlfriend Sthuthi David’s favorite film, Sleeping Beauty, working with an animator to change heroic Prince Philip and snoozing Aurora to resemble himself and his high school sweetheart, and changing the climactic “kiss” into an animated bended-knee proposal.

Lee didn’t tell Sthuthi about it, and instead, let her see it for herself at the end of December in a screening room she didn’t realize was loaded with her friends and family, he explains on YouTube.

Lee set up a split screen so you can see her confused reaction as the Disney film deviates from the one she knows so well — and after Phillip shows off the ring in the film, he tosses it up off-screen, whereupon Lee stands up, and somehow catches it IRL.

He then gets on one knee. “It’s not every day you get to propose to your High School sweetheart,” he tells a stunned Sthuthi, and then to the animated couple on the screen, who gesture for him to get on with it, he asks “Do you mind? This is kind of a big moment.”

“Will you live happily ever after with me?” he asks her.

Of course, she said yes. “I thought something was wrong with the movie!” she exclaims, as the movie’s “Happily Ever After…” scene plays.

The video shows there was an alternate “Sthuthi said no” take, too, featuring the movie’s animated dwarfs crying.