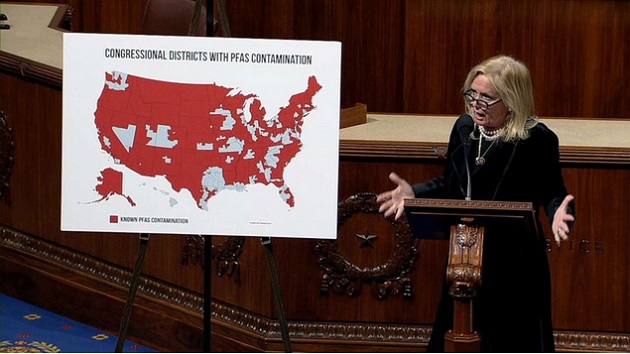 ABC News(WASHINGTON) — The House passed a bill on Friday that will require the Environmental Protection Agency to act to limit Americans’ exposure to chemicals connected to health problems amid a growing concern about the quality of drinking water around the country.The bill would require the EPA to set clearer drinking water standards and declare some types of per- and polyfluoroalkyl (PFAS) chemicals — commonly known as “forever chemicals” — as hazardous in one year, which would require cleanups at potentially hundreds of new Superfund sites around the country. It would also require the agency to set a maximum limit of the chemicals allowed in sources of drinking water.These man-made chemicals are so common that the Centers for Disease Control and Prevention said almost all Americans have a measurable amount of the most well-known types in their blood.Two specific, older types of these chemicals, called PFOS and PFOA, are known as “forever chemicals” because they take so long to break down in the environment after they are released from industrial sources ranging from the firefighting foam used at airstrips and on military bases to waterproof or nonstick products, such as stain repellent, cleaning products or food packaging.An agency within the CDC that evaluates human health risks released a report last year that found PFOS and PFOA chemicals caused health effects in rodents at even lower levels than the EPA’s recommended health limit — this included an increased risk of some cancers, interfering with hormones and the immune system, and growth and developmental impacts on children and infants.The Environmental Working Group, an advocacy group that pushes to limit exposure to chemicals, has found that water data shows as many as 16 million Americans could be exposed through their drinking water to levels of these chemicals that are well above the EPA’s recommended health limit.Many of the sites where contamination is in the groundwater or in drinking water lower than the EPA’s recommended health limit have faced challenges getting help to clean up the chemicals because currently there are no federal guidance or requirements on when it has to be cleaned up and who will pay for it.The EPA said it is “aggressively addressing” the chemicals but has already missed deadlines announced as part of its action plan to address the chemicals.EPA chief Andrew Wheeler has previously told ABC News the agency has concerns about bills that could force action on the entire class of chemicals, saying it could force water systems to spend money testing for and addressing the chemicals even if they have more pressing concerns.Lawmakers from Michigan, where the state has been aggressively testing water quality since the Flint crisis, have been Democrats have also tried to add provisions on the chemicals to the NDAA and the spending bill but the measures were ultimately dropped.Rep. Debbie Dingell, who introduced the bill, gave a strong speech on the lack of action around these chemicals during debate over the bill, standing next to a map that shows the vast majority of congressional districts have some kind of contamination identified.“Did the Flint water crisis not teach us in this Congress and the country something. I hope and urge, I thank all of my colleagues that have worked on this issue. When you know the facts I don’t understand how anybody can let American people be poisoned and it’s time for us to act,” Dingell said in debate this week.But the bill may not go much further, as Senate leaders and the White House have said they don’t support it. As Sen. John Barrasso, chairman of the Environment and Public Works Committee, told Bloomberg Environment it has “no prospects” in the Senate. The White House has also threatened to veto the bill.While the vote was largely along party lines, 24 Republicans did vote in favor of the bill. Copyright © 2020, ABC Audio. All rights reserved.

Yemen, on brink of collapse, may suffer further after Trump decision on Ansar Allah
Turbulent week of weather ahead with 3 different storms tracking across US
Coronavirus live updates: University of Michigan pauses all sports after positive tests
7,000 National Guardsmen to remain in Washington through mid-March
Capitol rioter who allegedly tweeted he wanted to ‘assassinate’ Alexandria Ocasio-Cortez faces 5 charges
Tens of thousands protest across Russia in support of poisoned Putin critic Navalny