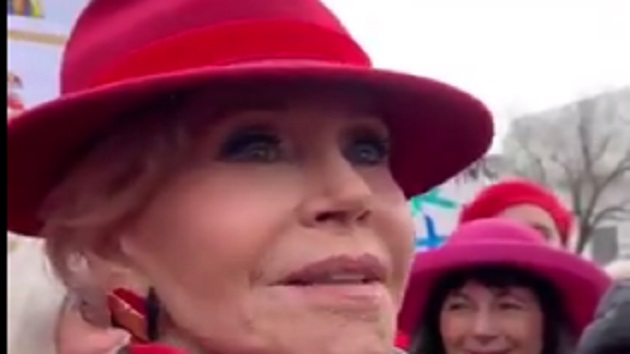 Twitter/@FireDrillFriday(WASHINGTON) — Academy Award-winning actress Jane Fonda marched on Capitol Hill in her last “Fire Drill Friday” protest, though she said on the event’s Twitter account that it won’t be her last climate change rally — just the last one in Washington “for a while.”The “Fire Drill Friday” protests — a weekly event organized by scientists, celebrities and community leaders to pressure lawmakers to take action on climate change — began as Fonda and others vowed to be arrested every Friday of 2019 in protest.As usual, Fonda was joined for her finale protest on Jan. 10 by a handful of celebrities, including fellow actors Martin Sheen, Maggie Gyllenhaal, Susan Sarandon and Joaquin Phoenix, who was arrested.“Today, we are going to focus on stopping the money pipeline that enables the fossil fuel industry to continue to expand,” Fonda said, mentioning banks that she alleges underwrite the fossil fuel industry.Having first been an activist protesting the Vietnam War when she was younger, Fonda returned to civil disobedience in the fall of 2019. She said she was mainly inspired by youth climate activist Greta Thunberg and the global climate strikes that were made popular when she spoke in front of the United Nations.”This is a crisis unlike anything that has faced humankind,” Fonda told ABC News Deputy Political Director MaryAlice Parks. “The reason that I’m here every Friday, with “Fire Drill Fridays,” is because I think every single human being has to say, ‘What can I do?"”Fonda was first arrested on Oct. 11. After an arrest in November, Fonda spent a night in jail, later telling co-hosts of ABC’s “The View” that “conditions weren’t great for old bones like mine on a metal slab.”Each Friday protest had a different theme, such as pushing for the enactment of the Green New Deal or the end of fossil fuel use, the group largely aimed to pressure lawmakers to take action against climate change.The Trump administration recently announced its plans to withdraw from the Paris climate accord, which would take effect on Nov. 4 2020 – the day after the 2020 elections.Fonda’s final Washington protest took place a day after the Trump administration announced it would move to change the landmark National Environmental Policy Act. Trump’s proposed changes to the NEPA would speed up environmental reviews, making it more difficult to judge what impact a project may have on climate change. The proposed changes caused Democratic lawmakers to accuse the administration of backtracking on environmental policy progress.“This means more polluters will be right there next to the water supply of our children, that’s a public health issue,” House Speaker Nancy Pelosi said on Thursday, reacting to the administration’s announcement.But since Thunberg came onto the world stage and natural disasters ranging from wildfires destroying much of California and Australia to hurricanes flooding the Bahamas and other islands, climate change has become a global political issue in the last year.Copyright © 2020, ABC Audio. All rights reserved.