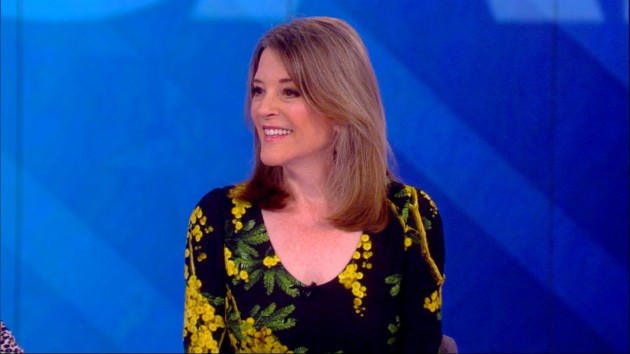 ABC(WASHINGTON) — Democratic presidential candidate Marianne Williamson announced that she is officially suspending her campaign. The best-selling self-help author vowed to stay in the race following a mass lay-off to her national campaign staff, leaving her with just a “skeletal staff” and her long-time assistant who stepped in to be her interim campaign manager.“The point of my candidacy has been to tell the heart’s truth and that does not cost money. Forging a new path for campaign’s is going to be necessary, if we’re ever to forge a new path for our country,” Williamson said in a statement in January following news that her national campaign staff was being sharply reduced. She added that she would rely on volunteers to push forward with her long-shot presidential bid.Williamson has struggled to gain momentum since announcing her presidential bid, failing to increase fundraising while amassing campaign debt and consistently remaining below 2% in the qualifying polls needed to get her on the debate stage. After parting ways with the campaign, Patricia Ewing, Williamson’s former communications director, told ABC News that “from a fundraising perspective, the campaign was no longer viable.”The celebrity spiritual adviser-turned-2020 candidate put love and peace at the center of her campaign, releasing plans to create a Department of Peace and a Department of Children and Youth. Throughout her campaign, she has faced criticism over her stance on vaccinations, once issuing an apology after calling vaccine mandates “draconian” and “Orwellian.”Williamson was also the first candidate to call for reparations for African American slave descendants and spoke candidly about her atypical presidential bid, touting her lack of experience as a strength. “I challenge the idea that the people who got us in this ditch are the only ones who can get us out of it,” Williamson said. She also faced criticism for some of her views. Williamson appeared on ABC’s The View in June and sought to clarify her position on childhood vaccinations saying that while she supports the concept of vaccines she doesn’t support the idea of anyone on either side of the debate mandating what people should do. “I understand the issue of public safety must come first. But I also understand that we must have a balance between public safety and the issues of individual freedom,” she told the show’s hosts and said that she doesn’t trust the “propaganda on either side.” The presidential run wasn’t Williamson’s first attempt to enter the political fray. In 2014, Williamson ran as an independent to fill a seat in California’s 33rd Congressional District. She said in a campaign press release that she decided to run for Congress because “I believe America has gone off the democratic rails. A toxic brew of shrinking civil liberties expanded corporate influence and domestic surveillance is poisoning our democracy.” She finished fourth, despite having raised about $2 million and gaining endorsements from celebrities like Kim Kardashian and Nicole Richie. Alanis Morrisette even wrote her campaign theme song. She told ABC News of that congressional race, “What I vastly underestimated was the significance of the fact that I knew nothing about running a political campaign.”Copyright © 2020, ABC Audio. All rights reserved.