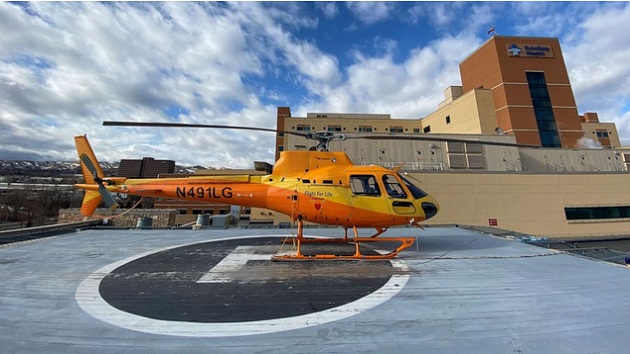 Clayton Sandell/ABC News(DENVER, Colorado) — Colorado authorities say they are stepping up the investigation into suspicious drone activity after a drone reportedly came into “dangerous proximity” to a medical helicopter.“Our operations may include the use of both ground-based teams and aircraft,” the Colorado Department of Public Safety said in a tweet.The new resources are being activated after a Flight for Life pilot told KUSA-TV that on Tuesday near the town of Fort Morgan, he saw a drone pass within one hundred feet of his helicopter.“It could have been a significant impact,” Kathleen Mayer, program director for Flight for Life Colorado, told ABC News. “If that were to come through the windscreen, it could certainly affect everybody inside that aircraft.”The FAA tells ABC News that the agency is looking into the report.“Safety of manned aircraft is the FAA’s top priority and we take all pilot drone-sighting reports seriously,” an agency spokesman said.The FAA said it received approximately 2,150 reports from pilots in 2019 who say they spotted drones, noting that the vast majority cannot be validated.More than 70 local, state and federal officials met on Monday to establish a task force to investigate reported drone sightings over Colorado and Nebraska that began in mid-December.Colorado authorities launched a surveillance plane loaded with high tech sensors and cameras to look for drones earlier this week, but officials say they didn’t find anything out of the ordinary. That hasn’t stopped widespread speculation online, with theories ranging from covert military operations to aliens and other conspiracies.“I have absolutely zero evidence or suspicion that any of the government officials are lying to us,” Colorado Department of Public Safety Executive Director Stan Hilkey told ABC News.So far, however, multiple authorities say haven’t found any evidence to support widespread suspicious drone activity, suggesting that people may be confusing airplanes, stars and even satellites with drones.“There’s a lot of reports out there that have proven to be legitimate manned aircraft or tower lights,” Hilkey said. “But there are some credible reports from people, and accounts of things that can’t be taken lightly.”Colorado officials posted a “frequently asked questions” document on Thursday about drone activity that noted how hard it can be to tell the difference between a drone and a plane, especially at night.“At night, it is very challenging, as the only thing visible are navigation lights and the human mind cannot easily determine how far away the lights are. This causes many lights in the sky, typically commercial aircraft, to be reported as drones,” the document said. “Lights in the sky similar in size to stars are most likely commercial aircraft.”Despite the lack of evidence so far, Hilkey says there is still enough demand among Colorado citizens and local agencies to keep looking, at least for now.“The people and the resources cost money,” Hilkey said. “But people want some answers. That’s what we’re here for.”Copyright © 2020, ABC Audio. All rights reserved.

Idaho murders: What we know and what’s still a mystery