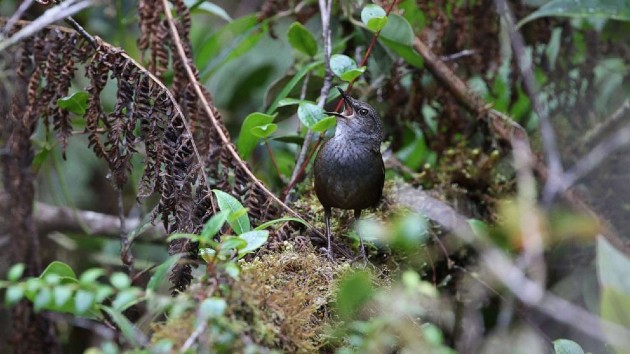 Courtesy James Eaton(NEW YORK) — Scientists who explored high altitude locations in the Indonesian archipelago discovered a group of new bird species. Five new songbird species and five new subspecies were identified living on the island of Sulawesi, located about 455 miles east of Borneo, during a six-week expedition between November 2013 and January 2014. In a paper that was published in Science Magazine Thursday, the scientists, who are based out of the National University of Singapore, said only five or six new bird species have been discovered annually since 1999. “The description of this many bird species from such a geographically limited area is a rarity,” they wrote in the paper.Among the new feathered discoveries is the charcoal-colored Taliabu Grasshopper-Warbler and the orange-breasted Tongian Jungle-Flycatcher.The lack of data of the island’s unexplored regions kept the birds out of the record books, according to the paper. Previous expeditions didn’t get past the island’s coast or go into the hilly terrain. Six of the birds were discovered in habitats on the island that were at elevations as high as 3 kilometers, the researchers said.The paper warned that these birds are in danger of losing their habitat. The island has suffered major deforestation over the decades due to logging and climate change, and many of the newly discovered species have trouble adapting to the new environment, according to the researchers. “Urgent, long-lasting conservation action is needed for some of the new forms to survive longer than a couple of decades beyond their date of description,” they wrote. Copyright © 2020, ABC Audio. All rights reserved.