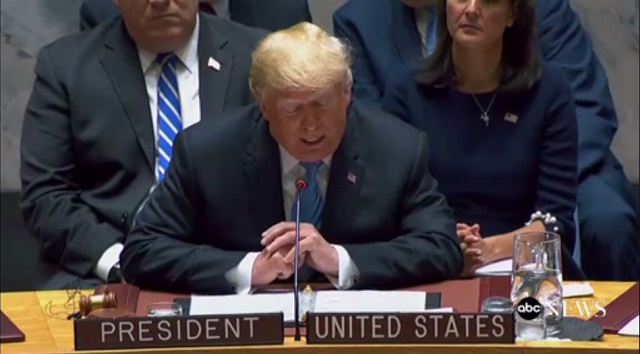 ABC News(WASHINGTON) — President Donald Trump said Friday that the threat of “imminent attacks” his administration has cited as justification for killing a top Iranian general including “four embassies,” including the U.S. Embassy in Baghdad, again adding new details to his account without offering more specifics and raising new questions about the immediacy of the threat.He made the comment in an interview with Fox News released after Secretary of State Mike Pompeo told reporters earlier Friday that the attacks were “against American facilities, including American embassies, military bases, American facilities throughout the region.”Trump told Fox News “that probably it was going to be the embassy in Baghdad.” He added, “I can reveal that I believe it would have been four embassies.”The drip of details followed days of administration officials facing questions about whether the “imminent attacks” initially cited by the president when he announced the U.S. had killed Maj. Gen. Qassem Soleimani were actually “imminent” and what exactly the targets were. Trump and the Defense Department provided no details or evidence of the attacks or their immediacy in initially announcing the strike, only sharing more details amid a week of questioning from reporters and members of Congress.Several U.S. senators have said the information the administration has shared with them has been inadequate — and that it has not gone even as far as what the president and his advisers have said publicly.Hours after striking Soleimani, a senior Iranian official, Trump said in a speech that he ordered the general killed to prevent future attacks. But over the coming days, the president primarily centered on the past, citing Soleimani’s role in the proliferation of roadside bombs in Iraq over the years. He has also cited what he said was the general’s central role in ordering a militia to attack a base in Iraq housing U.S. troops and subsequently storm the American Embassy in Baghdad, in the days before Soleimani was killed.But in the days since, administration officials have insisted the strike was intended to prevent a future attack, as well.”We don’t know exactly which day it would have been executed, but it was very clear Qassem Soleimani himself was plotting a broad, large scale attack against American interests, and those attacks were imminent,” Pompeo told reporters at the White House Friday. The day before, Pompeo said in an interview with Fox News that the United States did not “know precisely when and we don’t know precisely where, but it was real.”Administration officials had said Soleimani had American facilities housing diplomats and other personnel in the Middle East in his sights, and President Donald Trump on Thursday alluded to a plot targeting U.S. embassies.”We did it because they were looking to blow up our embassy,” Trump told reporters at the White House midday Thursday. “We also did it for other reasons that were very obvious.” He later added that Soleimani “had more than that particular embassy” — in Baghdad — “in mind.”Later that night, the president at a campaign rally again said that Soleimani was looking to attack U.S. embassies, although he refrained from using the phrase “blow up.””Soleimani was actively planning new attacks, and he was looking very seriously at our embassies, and not just the embassy in Baghdad,” Trump told supporters in Toledo, Ohio.A classified briefing on Iran for all U.S. senators on Wednesday did not address Trump’s claim “they were looking to blow up our embassy,” according to Sen. Tim Kaine, D-Va.”That’s news to me based on sitting through that hearing,” Kaine said on Thursday. “I sat through that hearing, I listened very carefully. I would have definitely had they said that. It’s news to me.”Sen. Amy Klobuchar, D-Minn., told MSNBC on Friday she had heard “nothing” specific about a potential, “imminent” attack on embassies. Right after the briefing on Wednesday, Republican Sens. Mike Lee, of Utah, and Rand Paul, of Kentucky, called the briefing lacking.Pompeo on Friday said the administration officials conducting the briefing, including himself, had provided the same information he was making public to senators two days before.The secretary of state’s comments Friday about the lack of precision on the timeline of the perceived threat mirrored remarks over the past week by the Chairman of the Joint Chiefs of Staff, Gen. Mark Milley.”Did [the intelligence] exactly say who, what, when, where?” Milley said Monday. “No. But he was planning, coordinating, and synchronizing significant combat operations against U.S. military forces in the region, and it was imminent.”Likewise, the day of the strike, Milley said there was “clear, unambiguous intelligence indicating a significant campaign of violence against the United States in the days, weeks, and months” ahead. On Tuesday, Secretary of Defense Mark Esper was asked if he would characterize it as being “days or weeks” away, and he said, “I think it’s more fair to say days, for sure.”A senior State Department official said the day Soleimani was killed that the Iranian general had recently visited and was planning attacks against U.S. interests in Lebanon, Iraq and Syria. One U.S. official said the target in Lebanon was the U.S. Embassy in Beirut.Pompeo said Friday that the threat had not been eliminated by killing Soleimani.”Threats are never gone. Right? It’s always a lot of danger in the world,” Pompeo said. “Always, always a lot of danger in the world, throughout the region. Nope, nobody believed that a single mission in any respect took down the risk of terror. Terror from al-Qaeda, terror from ISIS, terror from al-Shabaab. No, no one believes that. The president doesn’t.” Copyright © 2020, ABC Audio. All rights reserved.