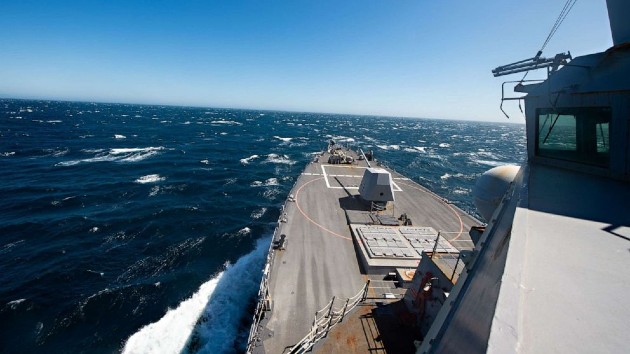 Petty Officer 3rd Class Jack Ais/US Navy(WASHINGTON) — American and Russian Navy ships narrowly avoided collision after the U.S. destroyer was “aggressively approached” by a Russian ship in the Northern Arabian Sea, according to the U.S. Navy’s Fifth Fleet. In video released by Fifth Fleet on Friday, the Russian ship can be seen approaching the U.S. Navy destroyer USS Farragut on Thursday, appearing to come well within a football field’s length from the American ship’s stern.In response, the Farragut “sounded five short blasts, the international maritime signal for danger of a collision, and requested the Russian ship alter course in accordance with international rules of the road,” Fifth Fleet said in a statement. The Russian ship “initially refused” but then “ultimately altered course,” allowing the two ships to separate and narrowly avoid collision.”While the Russian ship took action, the initial delay in complying with international rules while it was making an aggressive approach increased the risk of collision,” the statement said. “The U.S. Navy continues to remain vigilant and is trained to act in a professional manner.”Thursday’s incident is just the latest close call between American and Russian Navy ships. Last June, the U.S. Navy guided-missile cruiser USS Chancellorsville was forced to execute emergency maneuvers after a Russian destroyer came within several yards of the American ship, the U.S. Navy’s Seventh Fleet said.The USS Chancellorsville was operating in the Philippine Sea when the Russian ship DD572 “maneuvered from behind and to the right of the Chancellorsville, accelerated, and closed to an unsafe distance” of between 50 and 100 feet.Russia’s Pacific Fleet argued it was the American ship that changed course without warning, forcing the Russian ship to execute an emergency maneuver to avoid collision. The Russian statement also said that the ship, the Admiral Vinogradov, broadcast a protest on an international frequency to the U.S. ship, telling it that its actions were unacceptable.