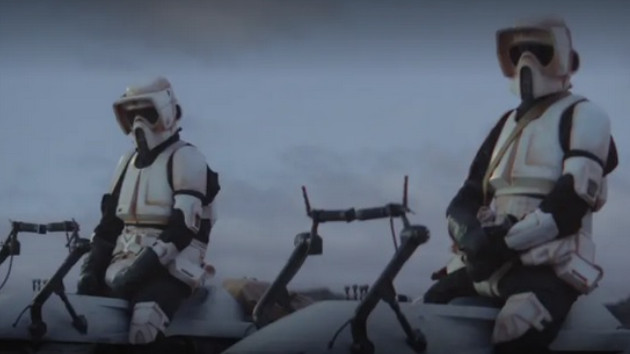 Pally’s trooper gave it to Baby Yoda — officially dubbed The Child — the worst, straight up punching it after the critter bit him.

At the Television Critics Association’s Winter Press Tour, Pally — a self-described “huge” Star Wars fan — credits his pal and Mandalorian creator Jon Favreau for getting him the job. The pair also crossed paths on Iron Man 3, which Favreau starred in and co-produced.

Pally recalls of his Mandalorian scene, “I remember the first take that I did when I punched [Baby Yoda]…They called ‘Cut!’ and Jon, who was watching on a monitor in his office, he came down from this office and said, ‘I just want to let you know that this is the hero [the main prop] Yoda and it costs, like, $5 million. So while I want you to hit it, I just want you to know that.’ Because I think I took a big swing at it. And the next three takes I missed, because I was so nervous.”Pally jokes, “I gotta tell you, the truth is that Baby Yoda is a bit of a diva. He’s constantly vaping.”

The Mandalorian is produced by Disney, parent company of ABC News.