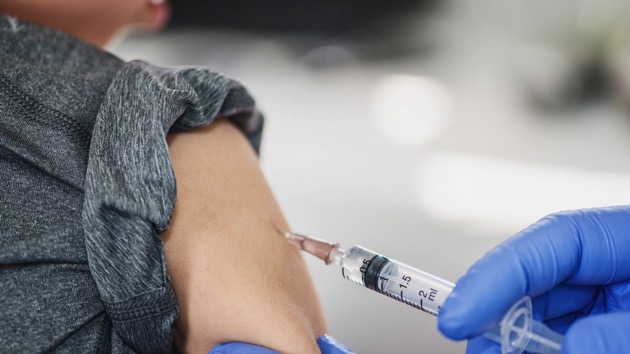 microgen/iStock(NEW YORK) — The mother of a 4-year-old girl is urging parents to get their children vaccinated after her daughter lost her vision and nearly died after getting sick with the flu last month.Amanda Phillips, a mother of two from Iowa, said her daughter, Jade, who did not get a flu shot this season, started showing signs of illness before Christmas, but she thought it was just a bug.However, Jade became unresponsive on Christmas Eve and her parents rushed her to the hospital.”Just a normal bug, the flu, for a couple days,” Phillips told Good Morning America. “And all of a sudden, you know, five days later, she was unresponsive and it was the drop of a dime that she was sick.”Jade was diagnosed with influenza B and placed on a ventilator. The 4-year-old was also diagnosed with acute necrotizing encephalopathy, an extremely rare disease usually preceded by a viral infection, after an MRI revealed abnormalities in her brain.”We think that what has happened in this case is there was an infection with influenza and then the body sort of overcompensates when it is fighting the infection,” Dr. Alex Bassuk, division director of Pediatric Neurology at the University of Iowa’s Stead Family Children’s Hospital, told GMA. “Sometimes instead of fighting the infection, it starts fighting itself, and in this case, it can fight the brain.”For nearly two weeks, Jade was bedridden and couldn’t open her eyes. But when she finally did, Phillips noticed that something wasn’t right.”She wouldn’t look at you when we were talking to her,” said Phillips. “She couldn’t focus. You would hand something, or try to give her a toy, and she wouldn’t grab it.”Jade’s doctor ended up finding inflammation in her brain, which ended up affecting her vision and leaving her blind.While doctors say that Jade’s case is rare, they remain hopeful.”Many of the children, especially when it happens in younger children, can recover significantly and we definitely have hope in this case there will be significant recovery,” said Bassuk. “But there can be permanent outcome from this process.”Now, Phillips is urging other parents to get their children vaccinated, which can not only prevent them from getting the flu, but can also offer protection from extreme outcomes like Jade’s if they do get sick.”It’s your child. You know, you want them to live a long and healthy life, to do whatever you can to make that happen,” said Phillips. “Any preventive measure that you could take, take it.”Copyright © 2020, ABC Audio. All rights reserved.