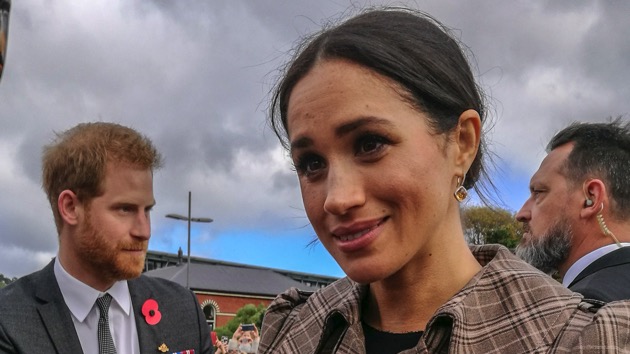 NataliaCatalina/iStock(LONDON) — Queen Elizabeth issued a new statement Monday on the future of Prince Harry and Meghan, the Duchess of Sussex, after a high-stakes family summit at Sandringham, her country estate in Norfolk, England.”Today my family had very constructive discussions on the future of my grandson and his family,” the 93-year-old queen said in a statement released by Buckingham Palace. “My family and I are entirely supportive of Harry and Meghan’s desire to create a new life as a young family.””Although we would have preferred them to remain full-time working Members of the Royal Family, we respect and understand their wish to live a more independent life as a family while remaining a valued part of my family,” the queen’s statement continued. “Harry and Meghan have made clear that they do not want to be reliant on public funds in their new lives.””It has therefore been agreed that there will be a period of transition in which the Sussexes will spend time in Canada and the UK,” the statement added. “These are complex matters for my family to resolve, and there is some more work to be done, but I have asked for final decisions to be reached in the coming days.”The summit at Sandringham was attended by Prince Charles and Prince William, as well as Queen Elizabeth and Prince Harry.Meghan was expected to join the family meeting remotely from Canada, where she is staying with her and Harry’s 8-month-old son, Archie.Harry and Meghan’s surprise announcement last Wednesday, first shared on Instagram, kicked off a chain of events that resulted in Monday’s family meeting at Sandringham.With the announcement, and a newly-launched website, the couple revealed they planned to “carve out a progressive new role” within the royal family that would include stepping back from their duties as senior members of the royal family, splitting their time between the U.K. and North America and working to become “financially independent,” while still supporting Queen Elizabeth and the monarchy.Money is likely one of the biggest sticking points the royals are discussing in Sandringham.Harry, 35, and Meghan, 38, the Duke and Duchess of Sussex, say they no longer plan to accept taxpayer money through the Sovereign Grant. But it’s unclear if Prince Charles will continue to fund his son and daughter-in-law and whether U.K. taxpayers will cover Meghan and Harry’s security and home expenses.With new roles both in and out of the royal family, the question remains how Harry and Meghan will earn their own money, and how they will do it in a way that is not seen as benefiting from their royal positions.The senior royal family members are also likely weighing how Harry and Meghan’s time abroad — which Queen Elizabeth confirmed will be in Canada — will impact the Commonwealth country both financially and logistically.”This is an unprecedented situation we are in,” ABC News royal contributor Victoria Murphy said last week when the couple’s plans were announced. “We’ve not seen anything like this before and their statement raises so many questions about how this new model will work.”Harry and Meghan’s “unprecedented” request to step back from their royal life is just one of the ways the couple has forged their own path since marrying in May 2018.The Duke and Duchess of Sussex established their own household, moved from Kensington Palace to Frogmore Cottage, launched new charitable initiatives and separated from the Royal Foundation, the charitable organization Harry founded with William and Kate.The strain the spotlight placed on Harry and Meghan was evident late last year in interviews the couple gave for a documentary on their tour of Africa.”I’ve said for a long time to H — that’s what I call him — it’s not enough to just survive something. That’s not the point of life,” Meghan told ITV News at Ten anchor Tom Bradby for the documentary, Harry & Meghan: An African Journey. “You’ve got to thrive. You’ve got to feel happy.””I think I really tried to adopt this British sensibility of a stiff upper lip. I tried. I really tried,” she added. “But I think that what that does internally is probably really damaging.”Prince Harry spoke honestly in the documentary about the grief he still feels over the death of his mother, Princess Diana, in a 1996 car crash in Paris, describing it as a “wound that festers” and one that motivates his actions today.The youngest son of Prince Charles and Diana also did not deny rumors of a rift between him and his only sibling, Prince William.”We’re certainly on different paths at the moment, but I will always be there for him and as I know he’ll always be there for me,” Harry said. “We don’t see each other as much as we used to because we’re so busy, but I love him dearly.”Harry is scheduled to make his first public appearance since he and Meghan released their statement on Thursday. He will host the Rugby League World Cup 2021 draws for the men’s, women’s and wheelchair tournaments at Buckingham Palace.Harry and Meghan’s last public appearance together was on Jan. 7, when they visited Canada House in London to show their appreciation for the time they spent in the country last month.Copyright © 2020, ABC Audio. All rights reserved.