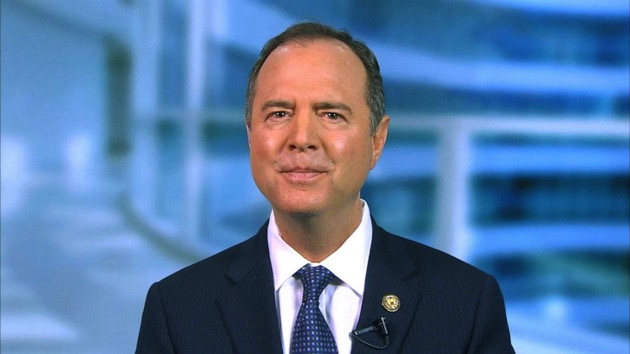 ABC News(NEW YORK) — House Intelligence Committee Chairman Adam Schiff said on ABC’s The View on Monday he hopes moderate Republicans in the Senate will push Majority Leader Mitch McConnell to allow witnesses to testify in President Donald Trump’s upcoming impeachment trial.Schiff also defended House Speaker Nancy Pelosi’s decision to wait to send the impeachment articles to the Senate, saying her move has made a more transparent trial more likely.”I don’t anticipate that Mitch Mcconnell is going to change his mind but what I am hoping is that the public pressure to have a fair trial will mean that these moderate Republican members of the Senate will insist on hearing from people like John Bolton and Mick Mulvaney and others who have first information about the president’s effort to shake down a foreign leader to help him cheat in an election,” Schiff told The View hosts, referring for the president’s former national security adviser and acting White House chief of staff, respectively.Schiff added that, without witnesses, McConnell could move to dismiss the impeachment case against President Trump and “sweep it under the rug.””At least we have the prospect now of holding senators accountable and insisting on a trial with witnesses,” he said.”If McConnell succeeds in dismissing this case without witnesses it will be the first impeachment case not just involving a president but involving anyone in the nation’s history in which a trial went forward without witnesses.”When asked if he would testify if subpoenaed, a move Trump and Republicans unhappy with how the inquiry was handled in the House have proposed, Schiff said, “I’m not a fact witness.”On whether former Vice President Joe or his son, Hunter Biden, should have to testify, Schiff said the impeachment trial should focus on questions around the president’s conduct with Ukraine and that the Bidens don’t have insight to the president’s decisions.”It would convert the Senate trial into the same kind of a sham proceeding that the president sought to have Ukraine undertake,” he said.”There’s been no factual basis for these allegations against Joe Biden, no factual basis. That is a Russian propaganda talking point. To ask the Senate to do these investigations that the president fraudulently sought to get Ukraine to conduct would merely turn the Senate trial on its head. Now, that’s something that the president would love but that’s not a fair trial. That’s a sham trial.”On Iran, Schiff said the intelligence he’s been briefed on doesn’t justify the president’s decision to kill Iran’s top general, Qassem Solemaini, in a drone strike.He specifically said he hasn’t seen any evidence Solemaini was planning to attack four U.S. embassies as the president has said and argued that the resulting risk to American servicemen and women is not justified.“I don’t think the evidence, the intelligence, justifies the targeted killing of a loathsome, and yes, bloodthirsty person but justified the targeting killing of Soleimani if it was going to increase the risk to Americans,” he said.In a tweet Monday morning, President Trump insisted that he was acting to prevent an imminent attack in ordering the killing of Soleimani but then in the next sentence argues that it “really doesn’t matter” because of Soleimani’s “horrible past!” Trump misspelled “imminent” as “eminent.”@realDonaldTrump: The Fake News Media and their Democrat Partners are working hard to determine whether or not the future attack by terrorist Soleimani was “eminent” or not, & was my team in agreement. The answer to both is a strong YES., but it doesn’t really matter because of his horrible past! Copyright © 2020, ABC Audio. All rights reserved.