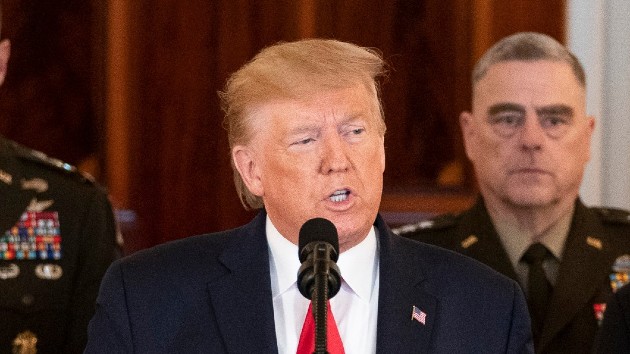 Official White House Photo by Shealah Craighead(WASHINGTON) — President Donald Trump on Monday insisted that the intelligence he and other top officials say justified the killing of a top Iranian general has been “totally consistent” despite shifting explanations. But the president and his administration’s accounts of the intelligence behind the threats have been far from consistent. Iranian Gen. Qassem Soleimani, leader of the elite Quds Force, was killed in a U.S. drone strike the morning of Jan. 3 at Baghdad International Airport. Trump said in a speech hours later that he ordered the general killed to prevent unspecified “imminent attacks.”In the week and a half that has followed, the president has primarily centered on the past, pointing to Soleimani’s role in the proliferation of roadside bombs in Iraq. He has also cited what he said was the general’s central role in ordering a militia to attack a base in Iraq that houses U.S. troops and subsequently storm the American embassy in Baghdad, in the days before Soleimani was killed. Administration officials insisted that the strike prevented future, “imminent” “attacks,” although they have said it was not clear to the United States exactly when or where they would take place. The chairman of the Joint Chiefs of Staff, Gen. Mark Milley, said three days after the strike that the intelligence did not say “exactly… who, what, when, (and) where” any attack would take place, although “it was imminent.” Similarly, Secretary of State Mike Pompeo told Fox News on Thursday the United States did not “know precisely when and we don’t know precisely where, but it was real.” That same day, Trump told reporters that the U.S. killed Soleimani “because they were looking to blow up our embassy” and “for other reasons that were very obvious.” He later added that Soleimani “had more than that particular embassy” — in Baghdad — “in mind.” Then, on Friday, Pompeo told reporters at the White House that that attacks were expected “against American facilities, including American embassies, military bases, American facilities throughout the region.” But he did not specify how many embassies the U.S. believed were in Iran’s sights. Later on Friday, during an interview with Fox News, Trump got more specific than any other official had in public, saying he believed four embassies would have been targeted. He gave no specifics and did not elaborate. But on Sunday, Secretary of Defense Mark Esper said in an interview with CBS News that he “didn’t see” specific evidence of an attack “with regard to four embassies” being threatened. Several senators also said the administration had not mentioned any imminent threat to four embassies — let alone embassies in general — during a classified briefing last week. The administration’s post-strike justification further evolved on Monday, when the secretary of state offered a mix of reasons for why Soleimani was targeted and why now. Arguing the strike was critical to a “bigger strategy” of “reestablishing deterrence” against Iran, Pompeo cited the “misery” he said Soleimani “nurtured” in the region and the deaths of hundreds of U.S. troops in Iraq. He added, though, that there also was “a set of imminent attacks that were being plotted by Qassem Soleimani”; he declined to get more specific.When Trump was asked on Monday what the intelligence showed with regard to the threats Iran posed to four embassies, he said, “I think it’s been totally consistent.” Trump did not elaborate, speaking to reporters as he departed the White House en route to a college championship football game in New Orleans, but he did note that Soleimani had “killed a lot of Americans, killed a lot of people” and that he was “the number one terrorist in the world.”His look into the rear-view mirror squared up with the revelation Monday that, according to an official familiar with the situation, the U.S. intelligence community began watching Soleimani more closely last spring as Soleimani escalated a campaign to counter increased pressure from the United States. The decision to closely surveil Soleimani would have allowed the U.S. to start tracking his movements more closely and collecting intelligence in the event that he one day became a target of opportunity — as the administration said he did in on the morning of Jan. 3 in Baghdad — an operation which again required presidential approval, the official said.Even as the Trump administration faced questions about just how immediate any threat was, Attorney General William Barr on Monday argued it did not actually matter. “I believe there was intelligence of imminent attacks, but I do believe the concept of imminence is something of a red herring,” Barr said. The attorney general said he did not believe there was any “requirement” of having the timing of a next attack, and that Soleimani was “clearly a legitimate military target” based on Iran’s escalating acts of aggression in recent months. Copyright © 2020, ABC Audio. All rights reserved.