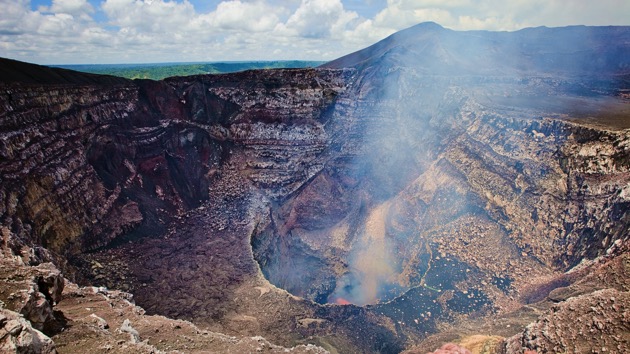 cnicbc/iStock(NEW YORK) — Acrobat daredevil Nik Wallenda, best known for his daunting high-wire stunts, announced his next big stunt will be the highest and longest walk to date.After completing a challenging routine 1,000 feet above New York City’s Times Square with his sister Lijana last June, Wallenda has set his sights on his next big target: an active volcano.”I’m going to become the first person in the world to walk a wire directly over an active volcano,” he announced on Good Morning America Tuesday. “It has been a dream of mine for a long time.”Wallenda said he searched for volcanoes around the world and decided on Masaya Volcano in Nicaragua.”This one was one of the very few that has an active lava lake. As we know from the news as of late, more and more are becoming active,” Wallenda said.But the stuntman said he is taking the proper precautions and has even started to train with some never before used tools.”It’s immense. It is everything that I’ve ever done times 10,” he said.He will face “sulfuric gases that are so thick that you can’t breathe through them, so part of my training is training with a gas mask — and blindfolded cause there is a great chance that I won’t be able to see,” he explained.The set will even implement infrared cameras “in case you can’t see me with the naked eye during that walk.”As if the stakes weren’t high enough with the daring location, Wallenda also revealed “this is the longest walk I’ve ever attempted and it is the highest walk.””So this is truly the greatest challenge that I have ever faced,” he said.”I live my life about trying to inspire and in order to do that I have to push myself beyond my comfort zone and that’s what I’m doing,” he said.Wallenda’s walk over the active volcano will air on March 4 at 8 p.m. ET on ABC. Copyright © 2020, ABC Audio. All rights reserved.

Is eco-vandalism an effective way to raise awareness about climate change? Experts weigh in.