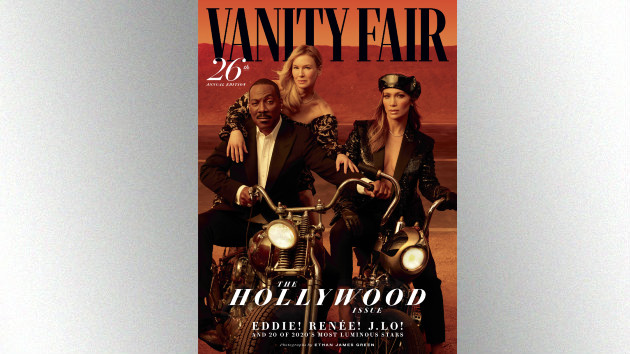 Ethan James Green/Vanity Fair(LOS ANGELES) — (NOTE LANGUAGE) Count the editors of Vanity Fair among those who were surprised that Eddie Murphy and Jennifer Lopez didn’t get Oscar nominations Monday.  They, along with Judy nominee Renee Zellweger, grace the cover of the magazine’s 26th Annual Hollywood Issue.

The issue also features interviews with Queen & Slim’s Daniel Kaluuya, Cats’ Jennifer Hudson, Little Women nominee Florence Pugh, her co-star and Marriage Story nominee Laura Dern, and Pain and Glory nominee Antonio Banderas — all of whom talk about what it takes to get — and keep — a career in Hollywood.

For his part, Murphy explained, “The people I knew around my age who had impact in their areas — Michael and Prince and Whitney — they’re gone. And without getting into…why they’re not here, what they had in common was that their career, their life as artists, was all-consuming.”

“The center of their whole s**t revolved around them as artists, and everything else suffered as a result,” he continued. “Your personal relationships, your finances, substance abuse problems. All that stuff is because show business can’t be the center. That’s the recipe for an early exit.”

Other stars featured in the issue include Beanie Feldstein from Booksmart, The Farewell’s Awkwafina, Oscar-nominated Jojo Rabbit star/writer/director Taika Waititi and his little leading man Roman Griffin Davis, Park So-dam from Parasite, Margaret Qualley from Once Upon a Time…in Hollywood, and others.