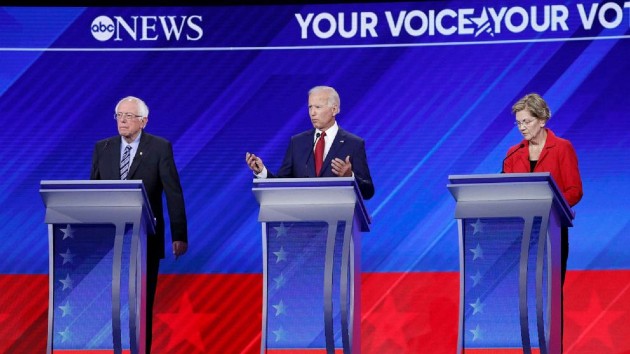 Heidi Gutman/Walt Disney Television(DES MOINES, Iowa) — The seventh Democratic primary debate is the first of the election year and the last before the first primary votes are cast. The matchup brings a frenetic Democratic field, fueled by the urgency of voting beginning on Feb. 3, to Iowa as intraparty infighting dominates an increasingly fractured primary race in the first weeks of the year, and particularly splintering the progressive wing that has stood united for most of 2019. In a contest with no clear frontrunner three weeks out from the first votes, the cease-fire between Vermont Sen. Bernie Sanders and Massachusetts Sen. Elizabeth Warren, which began before either launched their bids in 2018, is showing signs of fraying. After Politico reported that the Sanders team allegedly circulated a script for volunteers that includes talking points criticizing Warren as the candidate of the elite, Warren scolded her longtime friend and Senate colleague, telling reporters, “I was disappointed to hear that Bernie is sending his volunteers out to trash me.””Bernie knows me and has known me for a long time, he knows who I am, where I come from, what I have worked on and fought for, and the coalition and grassroots movement we’re trying to build,” she continued. “Democrats want to win in 2020, we all saw the impact of the factionalism in 2016 and we can’t have a repeat of that.”Sanders denied any responsibility for the campaign script, saying Sunday in Iowa, “I think this is a little bit of a media blow-up that kind of wants conflict. Elizabeth Warren is a very good friend of mine. We have worked together in the Senate for years. Elizabeth Warren and I will continue to work together and we’ll debate the issues. No one is gonna trash Elizabeth Warren.” But the fissures between them have only continued to escalate — despite neither candidate directly attacking the other. On Monday, CNN reported, according to the accounts of four people, that Sanders told Warren, during the 2018 meeting establishing their detente, he did not believe a woman could win. Sanders vehemently rebuffed CNN’s report, saying in a statement to ABC News, “It is ludicrous to believe that at the same meeting where Elizabeth Warren told me she was going to run for president, I would tell her that a woman couldn’t win.” “What I did say that night was that Donald Trump is a sexist, a racist and a liar who would weaponize whatever he could. Do I believe a woman can win in 2020? Of course! After all Hillary Clinton beat Donald Trump by 3 million votes in 2016,” he said.But Warren refuted Sanders’ denial, saying in her own statement, “Bernie and I met for more than two hours in December 2018 to discuss the 2020 election, our past work together and our shared goals: beating Donald Trump, taking back our government from the wealthy and well-connected, and building an economy that works for everyone. Among the topics that came up was what would happen if Democrats nominated a female candidate. I thought a woman could win; he disagreed.” “I have no interest in discussing this private meeting any further because Bernie and I have far more in common than our differences on punditry,” she added. Sanders and Warren’s showdown comes as the candidates are poised to face-off in Tuesday’s debate, hosted by CNN and the Des Moines Register at Drake University in Des Moines, Iowa at 9 p.m. ET.The televised event comes on the heels of a Des Moines Register/CNN poll, released last week, showing Sanders only slightly ahead in a tight race in the Hawkeye state with Warren, former Vice President Joe Biden and former South Bend, Indiana, Mayor Pete Buttigieg; a number of contenders releasing year-end fundraising totals, with Sanders leading the pack with a significant financial edge; and New Jersey Sen. Cory Booker, a candidate who has centered his campaign on issues impacting disenfranchised minority communities and voters, suspending his presidential campaign only a day before the matchup.Booker quitting the race underscores the waning diversity in the primary field, with the top six-polling candidates set to square off on both the smallest and least diverse debate stage yet. For the first time, the lineup will feature an all-white roster, after not a single candidate of color qualified for the debate. The candidates who will appear in the January debate, in podium order from left to right, are:

For most of the contest last year, the battle lines often pitted progressives against moderates as party identity defined the contours of the race and the disagreements between the candidates — ranging from health care to the role of big money in American politics. The last debate in December showcased one of those clashes, when Buttigieg and Warren engaged in one the night’s most pitched fights over high-dollar fundraisers. “Billionaires in wine caves should not pick the next president of the United States. I do not sell access to my time,” Warren said in reference to a Buttigieg fundraising event in California that earned the candidate scorn from the progressives in the race. “This is the problem with issuing purity tests you cannot yourself pass,” Buttigieg replied, pointing out the fact that while she was running for the U.S. Senate, Warren followed the same path he did.But with only 20 days until the Iowa caucuses, the focus on the top tier is even more intense. Since that last face off, Biden has contended with heightened criticism over his long record on foreign policy, which he frequently leans into on the trail to tout his decades of experience, particularly, his support for the 2003 invasion of Iraq. Sanders has repeatedly invoked Biden’s 2002 vote to authorize the Iraq War — which Biden has since called “bad judgement” — to contrast himself with the former Delaware senator and underscore his long-standing credentials as a “dove,” someone who tends to be more averse to the use of military force.”He brings into this campaign a record which is so weak that it just cannot create the kind of excitement and energy that is going to be needed to defeat Donald Trump,” Sanders said of Biden in an recent interview with the Washington Post. Over the weekend, Jeff Weaver, a senior advisor to the Sanders campaign, slammed Biden further in a statement, saying, “It is appalling that after 18 years Joe Biden still refuses to admit he was dead wrong on the Iraq War, the worst foreign policy blunder in modern American history.” Biden, too, took an apparent jab at Sanders recently for his foreign policy platform, as the two elder statesmen outline their clear differences in philosophy about the direction of American foreign policy in a post-Trump era. When asked by reporters in Cedar Rapids, Iowa in early January about Sanders’ judgement, Biden said, “You’re not going to get me into a fight with Bernie. Bernie’s got enough baggage.” But more surprisingly, in the opening weeks of 2020, the friendly fire blurred over ideological lanes. After nearly an entire year without visible tensions between Sanders and Warren, even as they occupy the same ideological territory, the progressive allies are finding themselves in the middle of a tense back-and-forth, mostly through surrogates and social media. Meanwhile, Biden and Buttigieg have spent most of their time in recent weeks training their focus on pitching unity on the stump, against what they argue is a divisive Trump administration. “Values like love of country have to begin with the understanding that our country, consistent people. And you cannot love a country if you hate half of the people in it,” Buttigieg said on Monday. Biden, who has from the onset of his bid cast the election as a battle for the soul of the country, said over the weekend, “We have to restore the soul of America, America’s soul is at risk. [Trump] comes down an escalator not much higher than those steps. And what’s the first thing he says? He’s running because he’s gonna get rid of those Mexican rapists…The reason you should trust me is because I feel this internal almost anger about a way in which we’re dividing this country.” Although there is some distance between the top-tier and the rest of the pack, flanking the front-runners will be Klobuchar and Steyer, who only secured a podium on the day of the qualifying deadline. Both will likely use the debate — and the national exposure that comes with it — to take advantage of potentially more speaking time to make their mark ahead of the final weeks of January. Regardless, all the candidates are set to take the stage against the backdrop of a far more heated campaign — reflecting the zeal of the state of the race. Copyright © 2020, ABC Audio. All rights reserved.