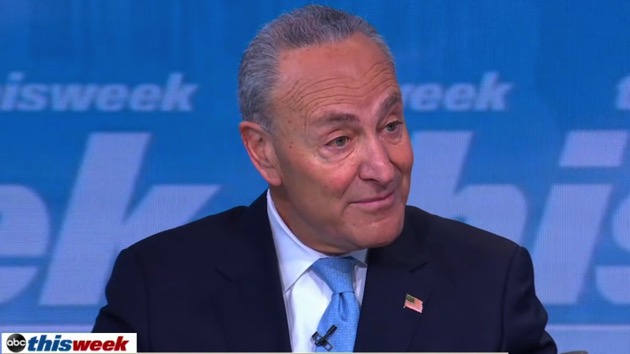 ABC News(NEW YORK) — Senate Minority Leader Chuck Schumer blasted President Donald Trump on Tuesday in an interview with ABC’s The View, saying Trump has “got to go,” because he said he’s destroyed America’s honor and values.“The greatest thing America has is its honor and its values. That’s what the Founding Fathers focused on. That’s what all of our great political thinkers have focused on, and no person — no person has done more to destroy the honor and values of America than Donald Trump,” Schumer told the hosts. “That’s why I think he’s got to go.”Schumer also called out his Republican counterpart Senate Majority Leader Mitch McConnell on the show, saying he was complicit in participating in a cover-up by withholding witnesses and documents from the upcoming Senate impeachment trial.“You know what Mitch McConnell said. He’s going to listen to whatever Donald Trump wants. One thing we seem to know … Donald Trump does not want the truth to come out,” Schumer said, adding, “He’s afraid of the truth.”Last month, McConnell told reporters that he was working in “total coordination” with the White House on the impeachment trial. But McConnell has not publicly ruled out the possibility of including live witnesses and documents from the trial entirely. Republicans have said in recent days that they are “open” to witnesses and it’s likely they will vote on the issue of witnesses after opening arguments in the Senate impeachment trial have been made.Schumer, in a letter addressed to the McConnell last month, asked to hear from acting White House chief of staff Mick Mulvaney, former National Security Adviser John Bolton, Associate Director for National Security at the Office of Management and Budget Michael Duffey and senior adviser to the acting White House chief of staff, Robert Blair — all of whom refused to participate in the House investigation.“I don’t know what they’ll say. It could be exculpatory or further incriminating and we’ll let the chips fall where they may,” Schumer said on The View. “But we will not rest until we get the truth.”After passing two articles of impeachment through the House of Representatives almost four weeks ago on Dec. 18, House Speaker Nancy Pelosi’s made a decision to withhold sending over the articles of impeachment until McConnell publicly announced the rules of an impending trial.”It’s about a fair trial … and we think that would be with witnesses and documentation,” Pelosi, D-Calif., told ABC News Chief Anchor George Stephanopoulos on This Week Sunday. “Now the ball is in their court to either do that, or pay a price for not doing it.”Schumer defended Pelosi’s decision at the time.“Had Nancy sent the stuff right over and McConnell moved to dismiss, who knows what would have happened,” Schumer said in response.Pelosi changed her mind Tuesday, announcing her plan to hold a vote on Wednesday on sending the articles over to the Senate.Earlier in the day, Schumer again blasted McConnell on the Senate floor for not deciding on witnesses at the outset of the impeachment trial.“The GOP leader keeps citing precedent — well, here’s precedent, Mr. Leader. There were two presidential impeachment trials in history — both had witnesses,” Schumer said on the Senate floor, referring to the impeachment trials of former Presidents Bill Clinton and Andrew Johnson. “This is weighty … this is vital … this is about the republic.”Shortly after word came about the planned House vote, McConnell took to the Senate floor to once again lambaste House Democrats over what he called their “arbitrary” month-long delay in sending over the articles. He again tried to make clear that he doesn’t support witnesses in a Senate trial, comparing the current case to those against Nixon and Clinton.“When the case was actually being compiled, mountains of evidence, mountains of testimony, long legal battles over privilege and none of this discovery took place over here in the Senate,” he said. “The Constitution gives the sole power of impeachment to the House.”He added, “If a House majority wants to impeach a president, the ball is in their court, but they have to do the work — they have to prove their case. Nothing, nothing in our history or our Constitution says a House majority can pass what amounts to a half-baked censure resolution and then insist that the Senate fill in the blanks.”During his interview, Schumer also commented on a doctored photo that Trump retweeted on Monday showing Schumer and Pelosi in front of an Iranian flag in traditional Middle Eastern-style clothing.

The corrupted Dems trying their best to come to the Ayatollah’s rescue.#NancyPelosiFakeNews pic.twitter.com/a0ksPHeXCy

“How low can the president go?” Schumer asked, adding “He seems to like to appeal to bigotry and divisiveness, instead of smart policy, bringing us together, keeping us safe.”He told the hosts that he feels the president’s foreign policy initiatives are “erratic, impulsive and egotistical.” Copyright © 2020, ABC Audio. All rights reserved.