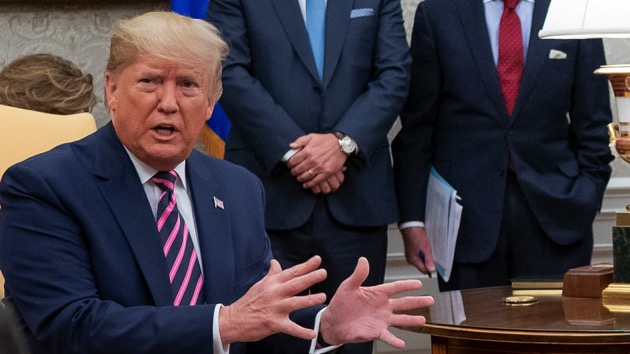 Official White House Photos by Tia Dufour(WASHINGTON) — President Donald Trump has closely consulted with aides about the makeup of the team tasked with defending him in the upcoming Senate impeachment trial, according to sources familiar with the matter.The team is expected to be led by White House counsel Pat Cipollone, along with the president’s personal attorney, Jay Sekulow. Cipollone’s deputies, Pat Philbin and Mike Purpura are expected to have a role as well.The legal defense the White House will present is significant. Because the White House chose not to participate in the House’s impeachment investigation, it will be the first time we hear the president’s attorneys defend him against charges of abuse of power and obstruction of Congress, mounting an argument for why he should not be removed from office.While it’s not immediately clear what strategy the legal team will seek to employ to adhere to the president’s demands of a trial that would support his claims of no wrongdoing, a central argument will be that the president did nothing illegal.The unknown factor here is whether a handful of the president’s staunchest allies in the House will be part of the defense team on the Senate floor. Republican Reps. Jim Jordan, John Ratcliffe and Doug Collins have spent hours prepping at the White House with members of the counsel’s office, according to sources familiar with the meetings. It would be Trump — and his attorney’s — preference to include them for a number of reasons.The House members would be used in what sources have described as a “support role” to counter the arguments made by the House impeachment managers — those yet-to-be-named members who will present the House case to remove the president from office. Sources say their firsthand knowledge of the evidence and various closed-door depositions is advantageous to the defense. Jordan and Ratcliffe attended nearly every closed-door deposition during the House impeachment investigation.But Senate Majority Leader Mitch McConnell and other Republican senators have made clear to the White House they are opposed to the idea and have been lobbying the president against it.And one of Trump’s top allies in the Senate, Sen. Lindsey Graham said he didn’t think it was wise to have House members defending the president during the trial.GOP Sen. John Cornyn also said he would advise the president against it, telling ABC News that it’s better to start fresh in the Senate because the House impeachment inquiry “was a little bit of a circus and I don’t think the Senate trial will be anything like that, which is fine with me.”But, Cornyn said, “that’s really up to the president. I mean if he wants to, listen, I would respect that choice.”After the articles of impeachment are transmitted, the Senate formally informs the president there will be a trial and what day it will start. The legal team is expected to be made public once the White House formally responds.The president’s personal attorney, Rudy Giuliani, has privately urged the president that he wants to be part of the defense in the trial, according to sources, and publicly told reporters earlier this month that he’d like to prosecute the case himself.However, that’s unlikely. People close to Trump have urged against this, as Giuliani is a focus of the impeachment probe for the work he did as it relates to Ukraine.A key question looming over the trial is to what extent the president will seek to influence the proceedings and limit witnesses who have direct knowledge of events at the center of the inquiry.Trump has previously said that he would like witnesses like acting White House Chief of Staff Mike Mulvaney and former National Security Adviser John Bolton to testify in the Senate trial, but more recently has indicted he would block any witnesses from discussing events that took place during their time at the White House.“Well, I think you have to for the sake of the office,” Trump told Fox News host Laura Ingraham in an interview when asked if he’d invoke executive privilege over witnesses such as Bolton.McConnell has made clear he sees no need for witnesses, but there is pressure — even from some Republicans — to hear from those with direct knowledge of the president’s dealings with Ukraine who were told not to cooperate with the House investigation, and Bolton has said he’s willing to testify should the Senate issue him a subpoena.White House officials are growing increasingly concerned that at least four Republican senators will agree to Democrats demands to call high-profile witnesses who may bolster some of the underlying details that House Democrats claim proves that the president’s conduct was impeachable. Copyright © 2020, ABC Audio. All rights reserved.