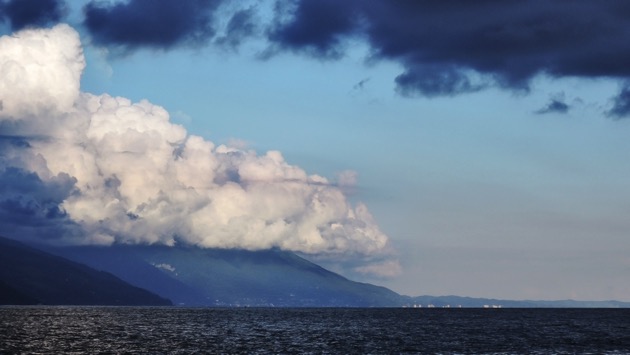 FILE photo – Каркоцкая Татьяна/iStock(NEW YORK) — The devastation of the Australia bushfires has been nothing short of catastrophic: over 15 million acres of land burned, at least 25 dead, and one billion animals feared dead, according to an estimate from ecologists at The University of Sydney.The intensity of the blazes has also paved the way for a common but dangerous weather event, known as a pyrocumulus cloud, that could cause even more destruction.What exactly is it?Pyrocumulus clouds, more colloquially known as “fire clouds,” are formed when wildfires burn hot enough and the hot air and smoke released into the sky generates a strong upward motion, called updrafts.The clouds are often gray, brown or black because of the smoke in the air, and can tower up to 5 miles (8 kilometers) high.NASA has called them the “fire-breathing dragon of clouds,” according to their website.Ominous in form, the clouds can also develop dangerous weather systems of their own and potentially lead to more harder-to-tame wildfires.Creating its own weather systemThe heat and speed of the rising air within pyrocumulus clouds tend to create a highly turbulent atmosphere. Such an atmosphere can then create its own weather effects, including a fire-fueled thunderstorm cloud that make it more difficult to put out fires in certain climates.In humid conditions, the effects of fire-fueled thunderstorm clouds can actually produce rainstorms that put out the fires.However, in dry conditions, like in Australia and Southern California, rainfall is more likely to evaporate within the cloud itself and never reach the ground.Even without the rain, the so-called “dry” lightning bolts of the thunderstorm cloud can rip through it and plunge to the surface, potentially sparking new fires.Pyrocumulus clouds can also increase wildfire spotting, which is when a fire produces sparks or embers that are carried by the wind and start new blazes beyond the zone of the main one.If one of the clouds becomes so large it is unstable, it could collapse on itself and lead to strong and erratic winds at the surface, which also increase spotting.How common are pyrocumulus clouds?More common than some may think, but it’s hard to say exactly how often they occur.Though researchers initially thought the clouds were caused by volcanic particles in the stratosphere, they are now more understood and, in turn, better tracked.”Our paper also shows that pyroCbs happen more often than people realize,” Dr. Glenn K. Yue, an atmospheric scientist at NASA Langley Research Center in Hampton, Va., said back in 2010 after co-authoring a paper on pyrocumulonimbus.In 2002, various sensing instruments detected 17 distinct pyrocumulonimbus events in North America alone, according to NASA.More recent numbers were not immediately available, but the clouds have already been seen in Australia as a result of the wildfires that began in September 2019.

A time lapse of the pyrocumulous clouds forming above the Currowan fire this evening. It was recorded at around 7pm January 4 from Suttons Forest looking toward Bowral. Thanks to Christopher Mortimer.#nswfires #nswrfs https://t.co/cW1VxtNI9c

NASA has also been tracking the smoke from pyrocumulonimbus events and studying its affect on the atmosphere.”Whether the smoke provides a net atmospheric cooling or warming, what happens to underlying clouds, etc., is currently the subject of intense study,” according to NASA.With the fires in Australia expected to last for at least a couple more weeks, possibly months, more pyrocumulus clouds — and the aftermath they could leave — should be expected.Copyright © 2020, ABC Audio. All rights reserved.