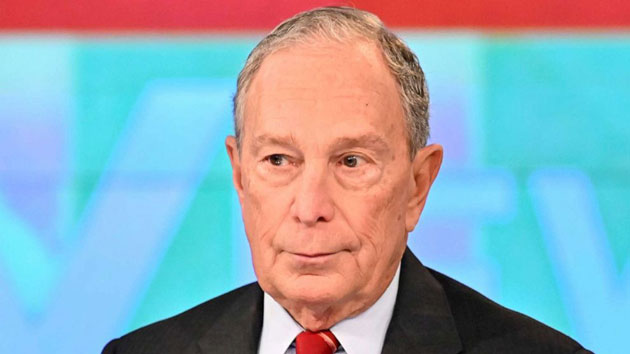 Jeff Neira/ABC(NEW YORK) — Presidential candidate Mike Bloomberg continues to defend his and his company’s conduct regarding the issue of nondisclosure agreements in settlements with former female employees who have brought lawsuits against the company and in some cases, Bloomberg himself.Joining ABC’s “The View” on Wednesday, Bloomberg described allegations of his past conduct and the culture it fostered at his company as “bawdy humor,” and reiterated that he will not take any steps to release women who have signed confidentiality agreements with his company to speak publicly.Multiple women in the past have made allegations that the former New York City mayor fostered a hostile work environment for some female employees.The View’s Abby Huntsman raised the issue with Bloomberg on the heels of earlier criticism from fellow presidential candidate Sen. Elizabeth Warren, D-Mass., who told ABC News Saturday, “what is it that he has to hide?”“We don’t have anything to hide,” Bloomberg answered on stage Wednesday, “But we made legal agreements which both sides wanted to keep things from coming out. They have a right to do that.”Bloomberg emphasized the integrity of his agreements with his former employees — and that the confidentiality agreements offer privacy, not imposed silence.“We have an agreement. You couldn’t do it if you wanted to. Incidentally, I think an awful lot of women would not want to do that. There may be a few but I don’t think so,” Bloomberg said, going on to offer candid regret about any “frat-like” humor he may have partaken in.“Did I ever tell a bawdy joke? Yeah, sure I did. Do I regret it? Yes, it’s embarrassing,” Bloomberg continued. “But, you know, that’s the way I grew up.”The alleged conduct attributed to Bloomberg and the company culture in legal complaints goes beyond “bawdy jokes.”ABC News reviewed court records that show at least 17 women have taken legal action against Bloomberg’s company over the past three decades, three of which remain active. Several lawsuits accuse him of fostering a hostile environment for women to work in the 1990s. Three of those cases specifically name Bloomberg and quotes attributed to him in the court filings include “I’d like to do that piece of meat,” and “I would do you in a second.”The alleged misconduct cited in the three active cases allegedly took place between 2012 and 2016. One of the plaintiffs, identified only as Margaret Doe, accused her manager of sexual assault. The manager was fired from the company before the lawsuit was filed, a company spokesperson said.A second lawsuit by another employee accused the firm of wrongful termination when she was dismissed while undergoing breast cancer treatment, and the third, brought by former sales executive Johnna Ayres, accused the company of age and gender discrimination. Bloomberg himself was named as a defendant in the Doe and Ayres cases.Bloomberg and the company have denied these allegations.He has continually pointed to what he maintains is his company’s “enviable record” on gender parity and has said, in answering ABC News’ questions on the issue of alleged harassment culture in his workplace, that he champions his employees’ success, no matter their sex or race.His refusal to release women from their secrecy agreements could be met with some blowback from a key voting bloc for the Democratic primary – young women. In the wake of the #MeToo movement — which championed women speaking out – there has proven low tolerance for anything else.”If his company has an enviable record, then let people in his company or former people from his company speak about that enviable record,” Warren told ABC News.For some supporters of the #MeToo movement — this issue speaks to deeper concerns about sexual harassment and workplace fairness, said Julie Roginsky, co-founder of the group Lift Our Voices.“If you want to be president of the free world and have that much power, you should have women’s backs,” Roginsky said.Roginsky and fellow journalists Gretchen Carlson and Diana Falzone say they started the group to educate the public about what they call “dangerous” nondisclosure agreements. Lift Our Voices sent letters to all of the presidential candidates asking them to publicly support an end to confidentiality provisions for sexual assault and harassment victims. The group told ABC News that former Vice President Joe Biden, former Massachusetts Gov. Deval Patrick, former Rep. Joe Walsh and entrepreneur Andrew Yang have agreed to support their efforts.“We want this to rise to the national level of discussion,” Roginsky said.Fatima Goss Graves heads the National Women’s Law Center, part of a collective of women’s rights groups behind hashtag #MeTooVoter. Her organization is urging elected leaders and candidates to create policy proposals that will support victims of sexual violence and harassment.“Anyone who’s running for office needs to address what has been the most dramatic public awakening in sexual violence in a generation,” Graves saidBut not everyone sees the exclusion of such agreements in settlements as a benefit to victims. Prominent harassment and discrimination attorney Gloria Allred told ABC News that confidentiality agreements generally are in the best interest of victims, not perpetrators, and that such contracts are a negotiation and can be accepted or declined.“It’s a voluntary process,” Allred said. “It’s up to the victim whether she wants to try to have a confidential settlement or not. Nobody silences her, nobody forces her to do it.”Bloomberg appeared on “The View” ahead of a scheduled event to launch a new group of campaign supporters – Women for Mike.