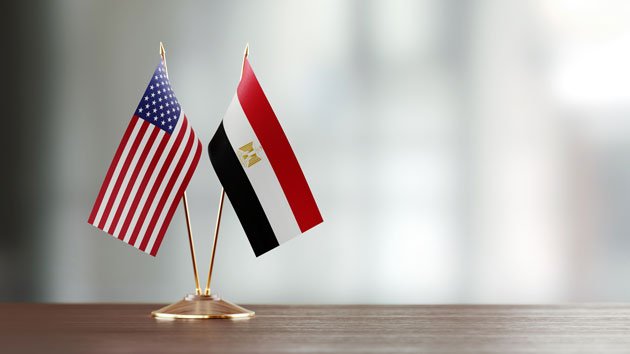 iStock(WASHINGTON) — A bipartisan group of lawmakers mourned the death of U.S. citizen Mustafa Kassem — who died in Egyptian prison after being imprisoned for over six years on trumped up charges — and they demanded the Trump administration impose sanctions on Egyptian officials as punishment.The Trump administration was accused by some members for abandoning Kassem, who made multiple pleas for President Donald Trump to secure his freedom from Egypt’s President Abdel-Fattah el-Sisi.”The White House refused to use its leverage to obtain his release. Instead, Trump has called President el-Sisi a ‘great friend’ and his ‘favorite dictator.’ That is as appalling as it is insulting to the families of President Sisi’s victims,” said Sen. Patrick Leahy, D-Vt.There is no excuse for what happened in this situation. … It’s an absolute disgrace,” said Rep. Pete King, R-N.Y., who was Kassem’s representative and advocated for his release.”Egypt needs us more than we need them,” said King, calling for a review of U.S. aid and the implementation of sanctions.A New York City taxi driver and father of two young children, Kassem was detained by security forces in August 2013, accused of participating in protests against the military’s takeover of the Egyptian government. But during his mass trial with more than 700 co-defendants, the Egyptian authorities never presented individual evidence against Kassem, whose lawyers told ABC News that, at the time, he was out to exchange money and shop the night before returning to the U.S.The night of Kassem’s arrest, then-Gen. el-Sisi crushed a sit-in protest in support of the former Islamist President Mohamed Morsi. He was ousted by el-Sisi and the military one month earlier after mass protests against his rule. The crackdown by el-Sisi’s security forces killed more than 800 people, according to human rights groups, with hundreds detained.In the mass trial, Kassem was convicted of trying to overthrow the government and sentenced to 15 years in jail. The day of his sentencing in September 2018 — already imprisoned for over five years — he began a hunger strike and wrote letters to Trump and Vice President Mike Pence begging for help.”I am losing my will and don’t know how else to get your attention,” he wrote in those letters, adding that while he knows “full well that I may not survive,” he had no choice.He died Monday, reportedly of heart failure, according to his lawyers at Pretrial Rights International.The top U.S. diplomat for the Middle East, Assistant Secretary of State David Schenker called Kassem’s death “needless, tragic and avoidable” on Monday. But the White House, which has touted its ability to secure Americans’ freedom overseas, including Aya Hijazi from el-Sisi’s Egypt, has been silent.Instead, Trump hosted Egypt’s foreign minister in the Oval Office Tuesday, as part of negotiations with Egypt, Sudan and Ethiopia over a dam. A National Security Council spokesperson declined to say whether Trump raised Kassem’s case with Foreign Minister Sameh Shoukry.”We have leverage. We have influence. We are not using it today,” said Sen. Chris Murphy, D-Conn., speaking alongside Leahy, King and others at a press conference organized by the Project on Middle East Democracy, a nonpartisan advocacy group. “We have to put the unfortunate death of Mustafa Kassem in the context of an administration that has frankly abdicated its responsibility to lead globally on the issue of civil rights and human rights.”Leahy and Sen. Chris Van Hollen, D-Md., wrote to Trump Wednesday, demanding that he sanction those Egyptian officials responsible for Kassem’s death under the Global Magnitsky Act.A senior State Department official said Monday it was “premature” to talk about repercussions for el-Sisi’s government. But several speakers at Wednesday’s presser said there must be accountability for the death of a U.S. citizen.”Mustafa trusted that his U.S. citizenship would save him. He knew he was innocent. He begged the president. … But we failed him. He was abandoned,” said Diane Foley, the mother of U.S. journalist James Foley who was detained and ultimately executed by ISIS. She’s since become an advocate for Americans detained abroad.Egypt receives about $1.5 billion in U.S. assistance each year — the second-most after Israel. But there are at least six other U.S. citizens currently detained in Egyptian prisons– although that’s a tiny fraction of the estimated 60,000 political prisoners el-Sisi has jailed, according to Human Rights Watch.”Egypt needs us more than we need them,” said King.There are at least seven Americans still detained in Egypt, according to Van Hollen.Copyright © 2020, ABC Audio. All rights reserved.