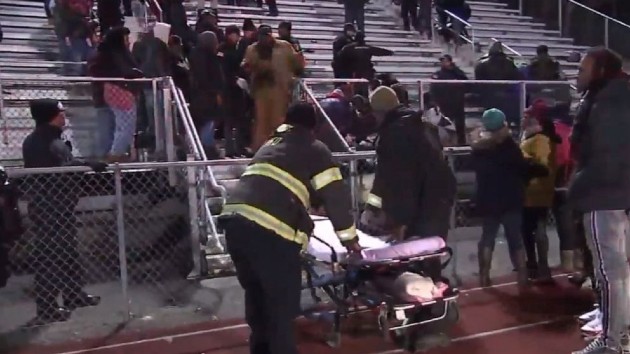 ABC News(NEW YORK) — A New Jersey high school coach who helped respond to November’s deadly shooting at a high school football game is one of the nominees for an NFL award. Dwayne Savage, the football coach at Camden High School, was coaching his Panthers against Pleasantville High on Nov. 15 when shots rang out in the third quarter. A 10-year-old spectator, Micah Tennant, was shot in the neck and later died. A 15-year-old and a 27-year-old were also struck by bullets as fans and players ran for cover.”My first instinct was to tell everybody to get down,” Savage told ABC Philadelphia station WPVI-TV. “It’s kind of hard to explain because, you know, sometimes you try not to get choked up about it. But having kids that you rely on and make sure that they are safe, you try to be their parent away from the family.”For his response to the shooting, both on the field and off, Savage has been nominated by the Philadelphia Eagles for this year’s Don Shula NFL High School Coach of the Year award. The annual award recognizes high school football coaches nominated by each of the 32 NFL teams for the qualities of character, integrity, leadership, dedication to the community, commitment to player protection and on-field success.In addition to his response on the night of the shooting, Savage is credited with playing an instrumental role in healing the affected communities by helping arrange to have the Nov. 15 game completed at the Eagles’ Lincoln Financial Field, where the final 17 minutes were played on Nov. 20. “It’s a great honor, especially being the fact that I’m an Eagles fan since I was a little kid,” Savage said of being nominated by the Eagles for the Coach of the Year award. “Coming from the Eagles, it’s like something you can’t believe.” “We got to see first hand the way he was able to impact the lives of not only the kids on his team, but the community as a whole,” Julie Hirshey, Eagles director of community relations, told WPVI.Six men have been charged in the Pleasantville shooting, including the 27-year-old man who was shot. Authorities have said he was the intended target of gunman Alvin Wyatt, 31, who is now facing multiple counts of murder, attempted murder and weapons offenses.Savage and the other 31 Coach of the Year nominees will attend the NFL Pro Bowl on Jan. 26 in Orlando, Florida, where the winner will be announced during the game. The two finalists for the award will each receive $15,000, of which $10,000 will go to their high school’s football program, according to the NFL. The two finalists will also attend Super Bowl LIV as guests of the league. Copyright © 2020, ABC Audio. All rights reserved.