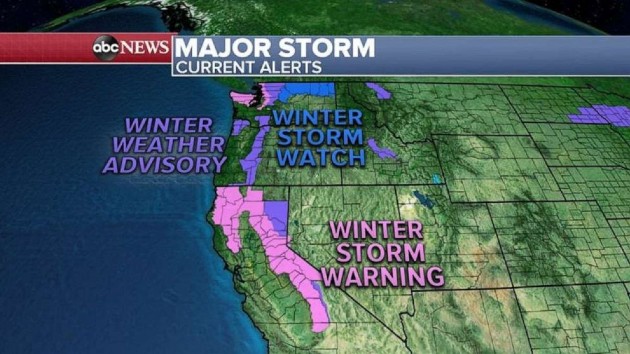 ABC News(NEW YORK) — On Tuesday, a flash flood emergency in Jackson, Mississippi, brought almost a half a foot of rain to some areas in just a few hours, flooding interstates, streets and neighborhoods and prompting water rescues. This was due to the stalled frontal system that brought all the severe weather to the U.S. this past weekend.On Wednesday, our attention turns to the West, where a new major storm is set to move in and then cross the entire county by the weekend, bringing the threat of heavy snow, ice and flooding. Five states are on alert already ahead of the storm, from Washington to California, for heavy snow and gusty winds.Later Wednesday, the storm will slam the Pacific Northwest and Northern California with heavy snow, rain and wind. By Thursday, the storm will move into most of California from San Francisco early in the day to Los Angeles in the evening.By Friday afternoon and evening, the storm system will redevelop into the Plains and join with tropical moisture from the gulf to produce heavy snow and ice in the Upper Midwest and the Great Lakes, including the Twin Cities and even as far south as Chicago. Major delays are expected.By Saturday, the storm will move into the Northeast with heavy snow and ice from Pennsylvania to Maine and heavy rain from New Jersey to Virginia. At this point, it looks like the major cities along I-95 will see a mix of snow and rain, changing to all rain by the evening. However areas just inland from northern Pennsylvania to Hudson Valley, New York, and into most of New England, should stay as heavy snow with some ice. Significant snow and ice accumulation is possible. Copyright © 2020, ABC Audio. All rights reserved.