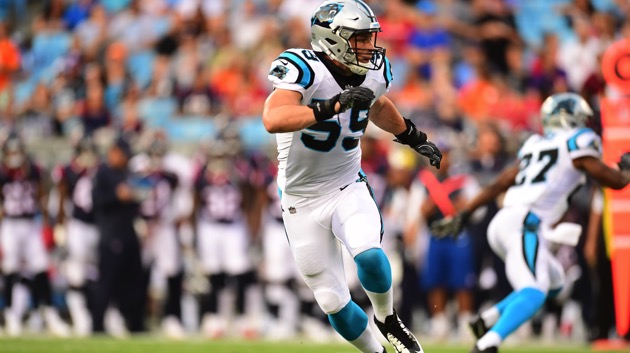 Phil Ellsworth / ESPN Images(NEW YORK) — Luke Kuechly was gasping for air. The look in his eyes — fear, panic, not again — was unmistakable, even as they welled with tears. He was still gasping as he was carted off the field.It was November 2016, and Kuechly, as linebacker for the Carolina Panthers, had taken a head-rocking hit facing the New Orleans Saints, suffering a concussion.The season before, he had missed 34 days following concussion protocol for a head injury in the first week. He would go on to suffer one more known concussion in 2017.”There’s only one way to play this game since I was a little kid — play fast, play physical and play strong,” the 2013 Defensive Player of the Year said in a video posted Tuesday by the Panthers announcing he would be retiring from the sport, at the age of 28. “At this point, I don’t know if I am able to do that anymore.”He didn’t explicitly mention concussions in his announcement, but it was not far from the minds of many analysts and fans.Kuechly joined a series of high-profile football players retiring before the age of 30, each of whom suffered a series of injuries.Less than five months ago, Indianapolis Colts quarterback Andrew Luck, then 29, announced his retirement, citing injuries; his shoulder, kidney, rib, calf and ankle had been affected within his seven seasons in the NFL.”I’ve been stuck in this process,” he said during an impromptu news conference as news broke in August. “I haven’t been able to live the life I want to live. It’s taken the joy out of this game.”Five months before that, New England Patriots tight end Rob Gronkowski, then 29, announced his retirement.Gronkowski, who suffered two known concussions with the NFL, later said in an interview with NBC that chronic traumatic encephalopathy (CTE), a degenerative brain disease found in individuals who faced repeated brain trauma, was a factor in his decision to retire at 29.”That’s why I took the action and got away from the game,” he said. “I was walking around, my mood swings were totally up and down. I was aware of what was going on with my body and my mind and that’s why I had to walk away.”Gronkowski would go on to speak frankly about the injuries he suffered, saying he “probably had like 20 concussions in my life.”The decisions to retire early come alongside two factors: growing awareness of the lifelong effects of CTE and other football-related injuries and massive contracts that allow players to accumulate wealth quickly, even if they break a contract early.Thanks to a significant lawsuit over concussion-related brain injuries and advocate campaigns, players are arguably more aware now than ever the potential lifelong risks of playing — and each additional year only increases those risks.Gronkowski spent his nine-year career with the Patriots and reworked his contract with them several times, increasing his incentives to become the highest paid tight end in the league in 2018. By the time he retired, he had made some $50 million, not including his endorsement deals, according to CNBC.When Luck retired, Colts owner Jim Irsay said he was leaving some $450 million on the table by retiring when he was still a rising player. He immediately gave up about $58 million left on his contract, according to Indy Star. But he had also already made over $100 million, per the Indy Star.As for Kuechly, his 2015 contract with the Panthers made him the highest paid middle linebacker and included a $19 million signing bonus with a guaranteed $34 million, per ESPN. He could’ve made $10.8 million in 2020, according to Sports Illustrated.But each of these players decided what they already had was good enough — and that extra $10.8 million was not worth what it could take away.Copyright © 2020, ABC Audio. All rights reserved.

Families say more should have been done after 3 murders at New York City housing complex
Police, residents plead for ceasefire after South LA sees 59 shooting victims in 1st 2 weeks of 2021
Protests break out across Russia in support of poisoned Putin critic Navalny
Pastor says addressing resistance to Biden administration is part of the job
John Krasinski, Dan Levy, Regina King are the first ‘SNL’ hosts of 2021
Lawmakers outraged at images of National Guard sent from Capitol to parking garages