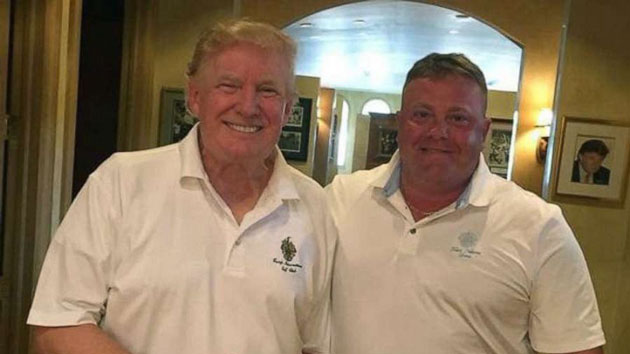 HYDE for US Congress/Twitter(WASHINGTON) — Documents made public by the House Intelligence Committee Tuesday night introduced a new character in the ongoing impeachment drama: Robert Hyde, a candidate for Congress from Connecticut and a longtime supporter of President Donald Trump.In WhatsApp messages released by the committee, Hyde and Lev Parnas, a Soviet-born associate of the president’s personal attorney, Rudy Giuliani, appeared to discuss security details former U.S. Ambassador to Ukraine Marie Yovanovitch, “suggesting that he had Ambassador Yovanovitch under physical surveillance in Kyiv,” the committee wrote. In November, Hyde shared tweets calling the former ambassador a “scumbag.”Reached by ABC News late Tuesday, Hyde declined to comment on the messages — but said he was “absolutely not” aiming to harm the ambassador.Hyde dismissed questions from ABC News with sarcasm and political bluster, saying over text for instance that his attorney is Johnny Cochran, the deceased lawyer made famous for his representation of O.J. Simpson in the 1990s, and said “Bull Schiff and his whistle blowers can comment for me,” referring to Adam Schiff, the chairman of the House Intelligence Committee.A review of public records, social media, and press reports describe Hyde as a military veteran with frequent access to several people within President Trump’s inner circle – and political ambitions of his own.Hyde, 40, is running in a crowded field of Republicans for Connecticut’s 5th District seat in the U.S. House of Representatives. His campaign made local headlines last month when he posted a derogatory Twitter message describing Sen. Kamala Harris’ decision to drop out of the Democratic presidential primary, prompting high-profile Republicans across the state called on Hyde to withdraw from the race, which he declined to do.On Wednesday, Themis Klarides, the Republican Minority Leader in the Connecticut House of Representatives, said that Hyde’s alleged messages in the House Intelligence Committee records only re-enforce her belief that he is unfit for public office.“Before even what happened this week we thought he should step down,” Klarides said. “This appears very clearly to be a person that doesn’t really belong in the public sector representing people.”Federal Election Commission records indicate Hyde’s political activities stretch back further. During the 2016 cycle, Hyde donated tens of thousands of dollars to President Trump’s campaign and inaugural committee. His pinned message on Twitter indicates he publicly encouraged Trump to run for president as early as 2012.Candidate financial disclosures filed last month shed some light on the source of Hyde’s wealth. The records describe multiple assets and sources of income amounting to well over $1 million, and Hyde lists work in public relations for three entities, including LightStone Group, whose website identifies it as a real estate investment firm.He also lists public relations work he conducted for Cheng Gao, whom Mother Jones described as a “mysterious Trump donor from China.” In 2016 and 2017, Chen Gao donated a total of $150,000 to Trump Victory, a joint fundraising committee between the Trump campaign and the Republican National Committee.Hyde also names himself as “consultant/president” of a company called A10 Associates, a state and federal political lobbying firm active in Washington, DC, Indiana, and Massachusetts. In a candidate survey on Ballotpedia, Hyde wrote that he “started a small business while attending [Central Connecticut State University]” and “grew the company to just about a hundred employees.”ABC News reached out to both LightStone Group and A10 Associates on Wednesday and did not immediately hear back.In the Ballotpedia survey, Hyde wrote that if he could be one fictional character, it would be James Bond.One recurring theme in publicly available information about Hyde is his unwavering support of President Trump. It was not immediately clear how he first connected with Parnas or Giuliani, but images on his social media profiles show Hyde alongside several figures in or near the president’s inner circle, including his son Eric Trump, former Trump campaign manager Cory Lewandowski, former Trump advisor Roger Stone – and President Trump, himself.A search through publicly available legal records indicate Hyde has had multiple run-ins with the law in the past year. Notably, in May, police records from Doral, Florida, show Hyde had a run-in with police that led to his removal from President Trump’s property there, Trump National Doral.According to a police report obtained by ABC News, Hyde told officers that “he was in fear for his life, was set up and that a hit man was out to get him,” adding “several times that he was paranoid that someone was out to get him.” Before police escorted him off the property, “Hyde explained that his computer was being hacked by Secret Service.”In March of 2019 – the same day he communicated with Parnas on WhatsApp – a judge in Connecticut ordered Hyde to pay nearly $5,000 in fines and damages for docking his boat in a marina and failing to “pay for storage fees,” according to court records.On social media, Hyde frequently invokes his military service. In a Facebook post, he said he “served in Iraq with the Marines in 2003.” Military records provided by the Pentagon show Hyde served in the Marine Crops Reserves from 1999-2005 and confirm his time in Iraq. Copyright © 2020, ABC Audio. All rights reserved.