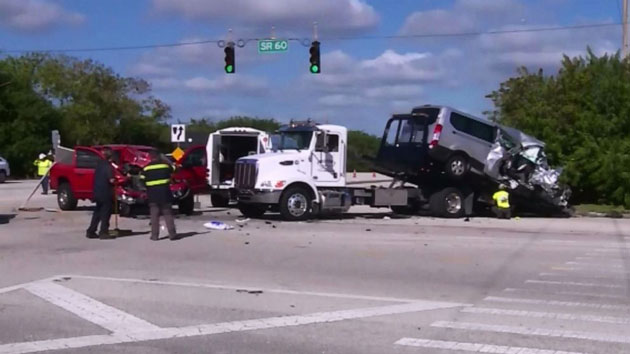 WPBF-TV(VERO BEACH, Fla.) — A member of the women’s rowing team at the College of the Holy Cross was killed in a car crash in Florida on Wednesday, officials said.The student was identified as sophomore Grace Rett, said Marybeth Kearns-Barrett, director of the Office of College Chaplains at Holy Cross.Rett was in the front passenger seat of a team van when it collided with a pickup truck in Vero Beach, police said.The van was carrying 11 student athletes and the head coach at the time of the crash, which was approximately 7:30 a.m., said Michele Murray, the college’s Dean of Students.The remaining survivors were all injured, officials said.Six students and the coach remain hospitalized with “varying levels of injury,” Murray told reporters Wednesday afternoon.”This is a terrible shock,” Murray said, overcome with emotion.The College of the Holy Cross is in Worcester, Massachusetts, but the team was in Florida for winter training ahead of the competitive season, Murray said.Rett, from Uxbridge, Massachusetts, “was incredibly passionate and hardworking,” Murray said. “She just set the world record for continuous erging: 62 hours and 3 seconds.”Rett spoke to Boston ABC affiliate WCVB just last week after setting the world record.”Physically I knew I could do it,” Rett said. “I knew it was going to be a total mental challenge.”Kearns-Barrett said chaplains and counselors will be available to help grieving students and staff.”Our thoughts and prayers are with Grace’s family, friends and teammates at this time,” Kearns-Barrett said in a letter to the community. Copyright © 2020, ABC Audio. All rights reserved.