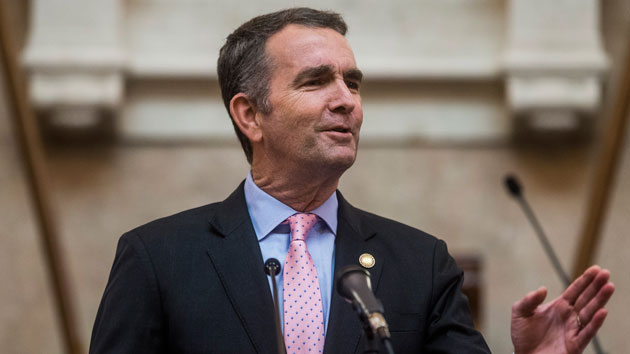 Zach Gibson/Getty Images(RICHMOND, Va.) — Virginia Gov. Ralph Northam issued a state of emergency on Wednesday that bars any weapons from the Richmond’s Capitol Square from Friday to Tuesday, after he received credible intelligence that hate groups and armed militias are planning violence at next Monday’s Lobby Day against gun control legislation.Northam, who discussed the threats at a news conference, said the state’s law enforcement analysis found that the chatter on the internet and other venues mirrored similar messages seen around the time of the 2017 Charlottesville “Unite the Right” rally, which left three dead and more than 30 injured.The governor declined to give exact details about the threats and the persons making them, but said that these groups, who were coming from outside of the state, talked about storming the Virginia Capitol.”They are not coming to peacefully protest, they are coming to intimidate and to cause harm,” he said of the outside groups.The announced weapons ban will include sticks, bats, chains, projectiles, and firearms, similar to the prohibitions issued on airlines and in courthouses, Northam said. State, Capitol and Richmond police officers will coordinate the safety in the square and set up checkpoints to make sure everyone adheres to the weapons ban.”It makes no sense to ban every other weapon but allow firearms when intelligence shows a threat of an armed militia groups storming our capital,” Northam said.Gun rights advocates from around the country plan on attending the state’s Lobby Day on Monday to speak out against new gun control legislation that is moving forward under the newly Democratic-controlled Virginia House of Delegates and state Senate. Some of the bills include universal background checks on guns, an assault rifles ban and a “red flag” law that would give judges the authority to order an individual to temporarily turn in their weapon if they are deemed a threat.Seventeen states including New York and Florida, as well as Washington, D.C., have previously passed red flag laws.The Virginia Citizens Defense League, VCDL, a group that describes itself as a “non-profit, non-partisan, grassroots organization dedicated to advancing the fundamental human right of all Virginians to keep and bear arms,” plans on holding a rally. Northam said he respects the rights of Virginians to protest and speak their mind about the gun control bills, but emphasized that he will not condone any threat of violence.He called on the VCDL and other gun rights groups to stick to peaceful protests.”I call on them to disavow anyone who wishes to use Monday’s rally to advance a violent agenda,” Northam said. “Hate, intimidation and violence have no place here.”Representatives for the VCDL didn’t immediately return messages for comment. Copyright © 2020, ABC Audio. All rights reserved.