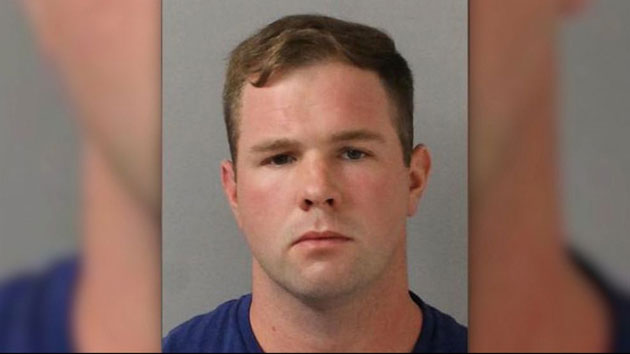 WABC-TV(NEW YORK) — A Nashville woman filed a $5 million lawsuit against a former New York City police officer who broke into her home, threatened her and yelled racial slurs in the midst of a drunken rage.Conese Halliburton, who is black, filed a federal lawsuit against Michael Reynolds on Wednesday, accusing him of charges including assault, trespassing and emotional distress.While visiting Nashville for a bachelor party in 2018, Reynolds, who is white, kicked in Halliburton’s door and screamed that he would “break every f—— bone” in her neck and called her and her children the N-word, according to the lawsuit.”Approximately eight minutes after invading Ms. Halliburton’s home, terrorizing Ms. Halliburton and her minor children, hurling racial slurs at them, and threatening them with deadly force, Officer Reynolds casually returned to the Airbnb where he was staying when it became clear to him that police were about to arrive,” the lawsuit said. “Upon leaving Ms. Halliburton’s home, a companion of Officer Reynolds yelled out and asked him: ‘Did you make her strip?"”Reynolds, who resigned from the New York Police Department earlier this month, was convicted on charges of assault and criminal trespassing in connection with the July 2018 incident. He was sentenced to 15 days in jail and three years’ probation in December after pleading no contest to four misdemeanors, according to court records.An attorney for Reynolds declined to comment when reached by ABC News.More than 10,000 people signed an online petition calling for his firing in support of Halliburton. Reynolds testified that he and his friends had been drinking before the incident. He could not remember how much he drank, but he said he entered Halliburton’s the home by mistake, thinking that it was his rental property, according to court testimony.”Ms. Halliburton hopes that ex-officer Reynolds has had some time to consider the consequences of his actions while serving his jail sentence,” Daniel Horwitz, the woman’s attorney, told ABC News in a statement Wednesday. “She also intends to continue pursuing this matter until Mr. Reynolds and the other officers who helped him try to cover up his egregious and criminal misconduct are held fully accountable.”Halliburton said the episode had left her and her children traumatized.”My kids want to move. They don’t want to be in that house anymore,” she said at the officer’s sentencing last month. “We don’t have peace. To know that you’ve been living somewhere all your life, and you don’t have that anymore, and where would you go, it’s not fair.””It’s not fair that somebody can laugh in your face and their friends can laugh about it like it’s a joke, and your life stops, and their life can keep on going,” she added.Halliburton is seeking punitive damages of $3.75 million and compensatory damages of $1.25 million, according to the suit.Earlier this month, the NYPD revealed that Reynolds had been placed on “modified duty” in light of the ongoing case. It announced the officer’s resignation, effective immediately, a few days later.”He will receive no pension or health benefits, nor will he be allowed to carry a firearm,” the NYPD said in a statement after the resignation. “His actions are wholly inconsistent with the values and standards the New York City Police Department expects and demands of its officers.”