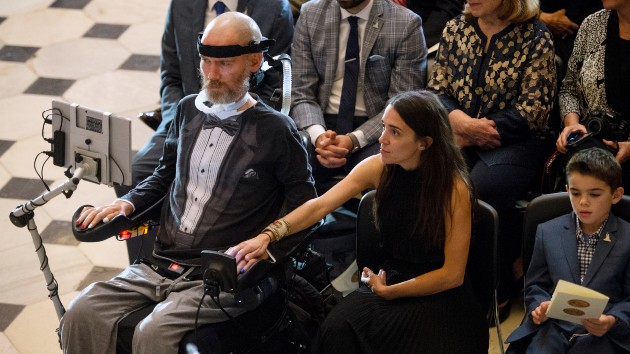 (WASHINGTON) — Amid the historic impeachment proceedings against President Donald Trump on Wednesday, House Speaker Nancy Pelosi and other congressional leaders paused the partisan battle to honor former New Orleans Saints player and disability rights advocate Steve Gleason. Gleason, 41, received the Congressional Gold Medal, the highest honor Congress gives to a civilian. “I suppose I don’t see my story as a football story or even an ALS story, but rather a human story,” Gleason said during the ceremony. “The truth is that we all experience pain in our lives, but I believe that the problems we face are our opportunity to find our human purpose.”

After his football career, Gleason contracted amyotrophic lateral sclerosis (ALS) — also called Lou Gehrig’s disease, a neurodegenerative disease that affects muscle movement and in late stages can cause paralysis and even death.He became an advocate for patients with ALS and in 2015 he worked to pass “The Steve Gleason Act” and later the “Steve Gleason Enduring Voices Act of 2017,” laws that give Medicare patients access to “eye tracking accessories for speech generating devices” to patients of ALS and other conditions. Gleason founded the Gleason Initiative Foundation, also known as “Team Gleason,” with the mission of showing that patients can live and thrive after an ALS diagnosis. The foundation helps provide leading technology, awareness and care for ALS patients. Gleason worked with Microsoft in 2015 to develop technology that allows people who are paralyzed to control their wheelchairs with their eyes.

In December, when he learned that he was to receive the Congressional Gold Medal, he said he and his family have come a long way since his initial diagnoses in 2011.”In many ways, I feel I’ve conquered ALS.” Gleason said. “Not only that, our foundations help others to be fellow conquerors – until we find treatments and a cure.” Gleason was joined at the ceremony on Wednesday afternoon by his wife, Michel, and son, Rivers. “I am honored and accept the Congressional Gold Medal for all the families who have been diagnosed with ALS, as well as anyone struggling to overcome life’s inevitable adversities,” Gleason said. In addition to Pelosi, Senate Majority Leader Mitch McConnell, Senate Minority Leader Chuck Schumer and House Minority Leader Kevin McCarthy were among the politicians from both sides of the aisle who attended Wednesday’s ceremony. “Truly Steve’s faith and goodness have given many people hope,” Pelosi said in her remarks. “Hope and a better future for those with ALS and for those all struggling in the face of adversity.” McConnell, who sat directly next to Pelosi during the ceremony, drew attention in his remarks to how many people looked up to Gleason as an inspiration.

“They’ve got their saint alright,” McConnell said, adding “number 37 to be precise.” And on the day of current Saints quarterback Drew Brees and his son Baylen’s birthday, Brees said there was no place they’d rather be than attending Gleason’s ceremony.”There is no person on earth with the strength, courage, passion and tenacity to overcome all obstacles and make the lasting impact that Steve has made,” Brees said. “A true American hero.” From 2000 to 2008, Gleason was a safety for the New Orleans Saints and is best known for blocking a punt that led to the Saints’ first victory in the teams’ Mercedes-Benz Superdome stadium following Hurricane Katrina.