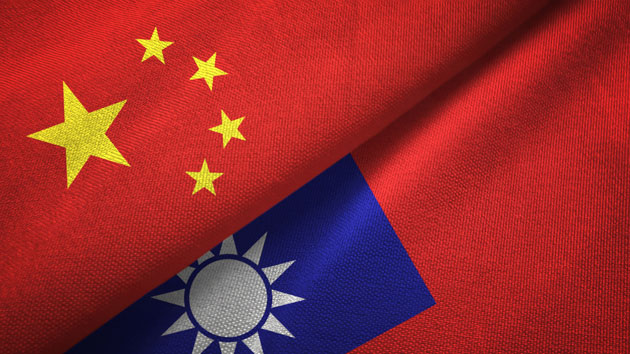 Oleksii Liskonih/iStock(LONDON) — Taiwan President Tsai Ing-wen called for China to respect Taiwan’s sovereignty and its commitment to democracy, just days after she won reelection in a landslide victory.Tsai — who is the first female president of the Republic of China — said Taiwan’s election results sent a strong message to the world.”We are a successful democracy, we have a decent economy [and] we deserve respect from China,” she said earlier this week in an interview with BBC.With a high voter turnout, Tsai garnered more than 8 million votes, a record high, handily winning her second term.Tsai focused her campaign primarily on mainland China’s increasingly aggressive encroachment on the island state and the Democratic Progressive Party’s commitment to democracy. She even rallied support from districts that traditionally vote for opposition candidates — in large part due to the backing of the younger generation, who are more likely to identify themselves as Taiwanese, a people separate from China.Citing the intensifying threats, increasing military exercises and continuing efforts to cut Taiwan off from its international allies, Tsai said she believes more people in Taiwan are getting a sense that “the threat is real.”With the ongoing protests in Hong Kong, Tsai said it is only a warning of what “one party, two systems” really looks like.Her predecessor, Ma Ying-Jeou, was able to build strong economic ties with China by maintaining the ambiguous status of Taiwan’s sovereignty.But Tsai has faced a different situation in recent years and renounced the previously agreed upon ambiguity, saying it “can no longer serve the purposes it was intended to serve.”Given Taiwan’s reliance on its economic relationship with China, part of the Tsai administration’s priorities center on diversifying and expanding the island’s economy — including convincing Taiwanese investors to relocate their factories back from China.China has long claimed sovereignty over Taiwan, starting first when nationalists escaped to the island after losing the Chinese Civil War in 1949.Under Chinese President Xi Jinping, the attitude toward Taiwan has only gotten more aggressive. After Taiwan’s election, Xi issued a warning saying “unification” is his condition if there were to be any talks or advances between the two governments.For Tsai and many others, Taiwan has developed its own identity, government, military and laws and functions as a sovereign country.”We don’t have a need to declare ourselves an independent state,” Tsai told the BBC. “We are an independent country already and we call ourselves the Republic of China.”Tsai emphasized her desire to deepen relations with the United States throughout her first term during her campaign. The U.S. has not formally recognized Taiwan as independent, but has maintained a strong, unofficial relationship with the island.Since last week’s election, many U.S. political leaders have issued statements congratulating Tsai on her victory, despite possible anger from the Chinese government.Leaders including House Speaker Nancy Pelosi who called this a “momentous election” where millions of Taiwanese reaffirmed their commitment to a free and open democracy, adding the “U.S. looks forward to further strengthening our firm partnership and friendship with Taiwan.”Secretary of State Mike Pompeo thanked Tsai for her leadership and praised Taiwan as a model and a force for good.When asked about her next steps with regards to China, Tsai said it’s time for China to “face reality.””If they are not prepared to face reality, whatever we offer won’t be satisfying to them,” she told the BBC. Copyright © 2020, ABC Audio. All rights reserved.

Verdict in France’s ‘trial of the century’: Between relief and the years ahead

Mystery remains over deaths of 21 teenagers at South African nightclub