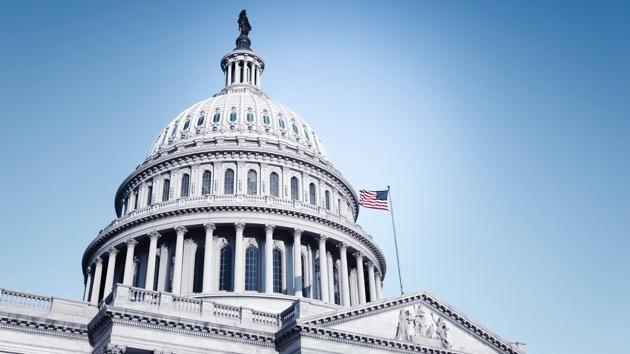 (WASHINGTON) — House Democrats, seeking to build on their successful 2018 blueprint that delivered a gain of 40 seats and the majority in the lower chamber, are kicking off the election year with an ambitious game plan for 2020 to both protect and expand their significant edge over Republicans.

The aggressiveness of their strategy reflects the zeal of the party as a whole, filled with urgency to not only advance their majority in Congress, but also take back the White House by ousting President Trump.”The bottom line is House Democrats are on offense across the country, prepared to protect and expand a House Majority that fights for the priorities of the American people,” Democratic Congressional Campaign Committee (DCCC) chairwoman Cheri Bustos said. “Our record fundraising gives us the ability to push deeper into Republican territory, hold Republicans accountable for their attacks on working families’ health care. We are pursuing an aggressive strategy that reminds voters that Democrats are working for the American people, while Mitch McConnell and Washington Republicans’ allegiance to special interests continues to jeopardize the livelihood of our seniors, the sick and America’s working families.”

Fueled by record fundraising hauls in the off-year, in which Democrats raked in nearly $125 million in 2019, the DCCC is committing its vast resources to expand their battlefield across a slate of competitive districts in Alaska, California, Kansas, North Carolina, New Jersey and Texas, according to a new election memo, mapping out the contours of Democrats’ 2020 winning strategy, released Thursday.In addition to the 39 congressional districts already on their offensive battlefield, Democrats are expected to deploy crucial investments in Alaska’s at-large district, California’s 25th district, Kansas’ 2nd district, North Carolina’s 8th district, New Jersey’s 2nd district and Texas’ 2nd district — bringing their target list up to 44.

“The DCCC knew that protecting and expanding this House majority in a Presidential year hinged on building the infrastructure to support a large offensive and Frontline battlefield,” the memo reads.Many of their 2020 target districts push into suburban areas, which historically represented the bedrock of Republican territory but have since been shifting away from the party in Trump era.

According to ABC News partner FiveThirtyEight, Democrats picked up 27 House seats in suburban areas in the historic 2018 midterm elections, “Trump is is causing change in the coalitions of the two major parties across the country, as white working class voters who used to vote Democrat increasingly vote Republican and college educated, sort of, economically comfortable suburban women move to the Democratic Party,” said Cal Jillson, a professor of political science at Southern Methodist University

.In New Jersey, after Rep. Jeff Van Drew switched parties from Republican to Democrat, the suburban seat became a critical target for both parties. In 2018, Van Drew flipped the longtime red seat to blue by roughly seven points. Democrats are fighting to keep their grip on the seat after November’s elections in the state legislature saw Republicans maintain a stronghold on their majority.The new Democratic targets, in part, appear to be tracing the lines of the so-called suburban revolt against the GOP, with several of the seats sitting in the outskirts of big cities.California’s 25th Congressional District sits on the outskirts of Los Angeles, while parts of Kansas’ 2nd Congressional District sit outside Kansas City and Texas’ 2nd in the northern surrounding areas of Houston.

In North Carolina, congressional maps were redrawn after a state court declared them unconstitutional partisan gerrymanders, opening up the state’s 8th Congressional District to competition from Democrats. The new district sits mostly in the suburbs but has a high population of minority communities. The nonpartisan Cook Political Report rates the race as Solid Republican.The DCCC also added the single House seat from Alaska, where the committee argues that internal polling gives Democrats a strong chance to win. That race has already seen significant spending on ads in an attempt to win over voters before Alaskans head to the polls in November.Driving the more vigorous 2020 approach is a four-part view, House Democrats contend, which includes: focusing on “voters’ top priorities,” making early investments — through a program called the “Cycle of Engagement” — to lay the groundwork for general election infrastructure, stockpiling a war chest to further widen their advantage over the GOP, and building on voter enthusiasm from November 2018 when the political environment favored their party.Among those reasons, at the crux of their formula to retain and build on their majority is one key argument, based on internal polling, that as Democrats “push further into Republican-held territory, the importance of [Mitch] McConnell as a foil beyond President Trump will be even more central.

“That message implicitly signals to the caucus that despite Trump being on the top of the GOP ticket this year, to compete in contests down the ballot, members should instead focus on McConnell, who the DCCC suggests is a more effective foil for Democrats.In a NBC News/Wall Street Journal poll from October 2019, McConnell’s approval rating hovered around 18% nationwide — far lower than Trump’s 45% approval.House Democrats plan to cast the Senate majority leader as the “grim reaper” of Democratic legislation – a nickname he has used himself, as he continues to refuse to take up their priorities in the Senate and leaving them to die on arrival, such as H.R. 3, a bill aimed at reducing the price of prescription drugs — a winning issue for Democrats in 2018.

With the focus on McConnell, the party apparatus asserts, Democratic candidates will be able to tout the extensive volume of bills they have passed since retaking the House, particularly the pieces of legislation that are popular or benefit their districts.Last week, during a briefing with reporters at the DCCC’s headquarters, Bustos made that case, saying she thinks it’s important for members to “run like you’re running for mayor” and build strong local brands.

For the more moderate Democrats, who could potentially have concerns about a presidential nominee who is out of sync with them ideologically or has embraced more progressive proposals in the presidential campaign, Bustos dismissed those worries, saying that the entire caucus – whether it’s the most vulnerable members or first-time candidates – should keep the campaign “hyper-local,” don’t “obsess about Donald Trump” and keep the focus on the 400 pieces of legislation Democrats have passed.”People will vote for the person,” she said. “Look at my district, they voted for Donald Trump, 11 of my 14 counties, Donald Trump won and many of those by double digits. I won all 14 of those counties.

“That theory is based on the strategy employed throughout the last cycle and 2019.In June 2019, the DCCC launched the “Cycle of Engagement” — an extension of 2018’s Year of Engagement – in order to “engage young people and people of color” through voter registration programs across the battleground map, especially among rural African American voters in North Carolina and eligible, but non-voting Latinos in Texas, according to the memo.In 2019, much of the committee’s efforts focused on fortifying their “frontline” members, a collection of 42 members deemed most vulnerable this cycle, including 30 members in districts Trump carried in 2016.

That class of “frontliners” raised more than $91 million in 2019 and across the entire group, about 75% ended with more than $1 million cash on hand, bringing their total amount in the bank to over $74 million among just those Democrats.The top fundraisers for the frontliners are Michigan Rep. Elissa Slotkin and New York Rep. Max Rose, who each brought in $1.2 million in the final quarter of 2019.The top priority for the DCCC in 2020 will continue to be safeguarding those Democrats that delivered the majority, but the Democratic challengers, who could potentially expand their majority, will not be far behind. Those slate of candidates raised at least $41 million in 2019, ending the year with well over $25 million cash on hand.Regardless of where Democrats see the 2020 battle for the House being won and lost, at the heart of their campaign to triumph once again will be a drumbeat on health care.”We really believe that this race is about health care,” a senior Democratic strategist told ABC News. “It sounds like a broken drum but it’s what the numbers show.”