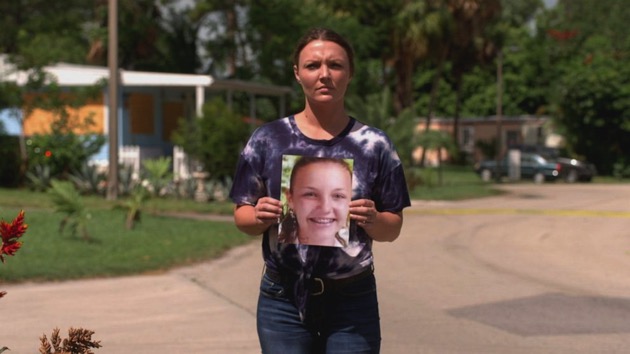 Courtney Wild is seen here holding a photo of her younger self. – (ABC News)(MIAMI) — For more than a decade, Courtney Wild, a survivor of sexual abuse by Jeffrey Epstein, has been a driving force in the effort to hold the United States government accountable for its lenient treatment of the late financier, who was spared federal prosecution in 2008 after being investigated for alleged crimes against her and more than 30 other minor girls.

On Thursday morning, Wild, 32, will be in attendance at a federal appeals court hearing in Miami as her attorneys seek to revive her case against the U.S. Department of Justice for violating her rights and those of dozens of other alleged victims of Epstein’s sex trafficking scheme.

“Epstein’s death shouldn’t mean all the wrongdoing in this case is swept under the rug,” Wild told ABC News. “People helped him commit these crimes. Everyone needs to be held accountable for the role they played in this.”

“The fact that Epstein died should not give a pass to the government or others who violated our clients’ rights,” added Brad Edwards, a Florida attorney who represents Wild and several other alleged victims of Epstein’s abuse. “Courtney will not stop fighting for justice for all of the victims and I could not be more proud of her resolve.”

Wild was just 14 years old when she says she was recruited by a friend to go to Epstein’s Palm Beach mansion, under the guise of providing a massage to an older man. In July 2008, she filed a civil suit against the United States, alleging that the U.S. Attorney’s Office in Florida had violated federal law by reaching a secret non-prosecution agreement with Epstein without conferring with the victims.

Under the deal, Epstein and any potential co-conspirators in his crimes were immunized from federal prosecution in exchange for his guilty pleas to two low-level prostitution charges in state court. Epstein served just 13 months of an 18-month sentence in a private wing of a Palm Beach County jail. He was released in 2009.

For 11 years, the federal government contested Wild’s lawsuit, arguing that prosecutors had no obligation to inform her and other victims about the deal because no federal charges had been filed. But last February, U.S. District Court Judge Kenneth Marra ruled in Wild’s favor, finding that the government had failed in its legal obligation to confer with the victims and had actively misled Wild and others to believe that a federal prosecution was still possible, even after the deal was signed.

Wild and her attorneys then asked the court to invalidate Epstein’s deal and to force the government to disclose documents that would shed light on how and why prosecutors opted to negotiate a deal with a man suspected of a multitude of sex crimes against children.

Five months later, Epstein was arrested by federal authorities in New York, where he was charged in an indictment alleging conspiracy and sex trafficking of children in Florida and New York. Epstein was found dead in his jail cell a few weeks later. Marra subsequently ruled that Wild’s case was moot and that he could grant none of the remedies she sought.

Wild is now asking the appeals court to review the decision to dismiss her case, arguing that the government and any potential Epstein co-conspirators should not be let off the hook. “It would be perverse if Epstein’s decision to take his own life operates to confer immunity on his criminal co-conspirators,” Wild’s attorneys wrote in court filings.

“Justice needs to be served in this case, and I never want this to happen to anyone else,” Wild told ABC News.The government will be represented at the hearing by prosecutors from the Northern District of Georgia, following the Justice Department’s decision to recuse the U.S. Attorney’s Office in Miami from further participation in the case.