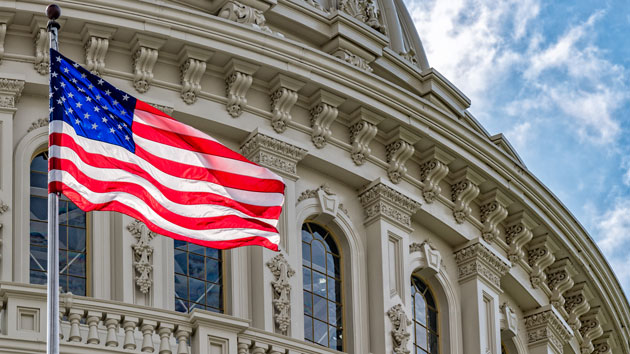 izanbar/iStock(WASHINGTON) — U.S. senators settled into their political foxholes on Thursday upon the kickoff of President Donald Trump’s historic impeachment trial, saying they would take their duties as jurors seriously while also declaring that the upcoming proceedings were either – depending upon their party – necessary to save the country or a complete waste of time.”I’m ready for this trial to end,” South Carolina Republican Sen. Lindsey Graham told ABC News’ Mariam Khan. “And all the evidence I’ve seen has nothing to do with the facts as far as I’m concerned.””They’ve given us two very weak articles of impeachment,” added Republican Sen. David Perdue. “Our job is to look at what they’ve brought us and decide if that rises to the level of impeachment.”For the Democrats, Sen. Richard Blumenthal, speaking at a news conference, drew comparisons to President Richard Nixon’s Watergate scandal, and accused Trump of hiring “henchmen” to do his dirty work and then blocking all efforts by Congress to hold him accountable.”Nothing we do while we serve in the United States Senate will be more important than putting country above party in this procedure,” Blumenthal, D-Conn., said.”The case is already overwhelming,” he later added.If there was any doubt of the hyper partisan atmosphere, Senate Democratic Leader Chuck Schumer of New York declared: “We want the truth, and maybe some Republicans would rise to the occasion.”Trump’s Senate impeachment trial officially began Thursday afternoon on a blustery January day in Washington as a group of House lawmakers – designated “impeachment managers” — marched across the Capitol carrying two articles that accused the president of abusing his power in office and obstructing Congress.During the House impeachment inquiry, the Democratic majority gathered evidence of a pressure campaign orchestrated by Trump’s lawyer, Rudy Giuliani, to get the newly elected Ukrainian government to announce an investigation that would take aim at the president’s chief political rival, Democrat Joe Biden.According to documents and witness testimony, Trump last July ordered a hold on nearly $400 million in security assistance for Ukraine – money the new democratically elected government desperately needed to fend off Russian troops at its border — and refused to lift the hold despite the White House being warned that doing so was possibly illegal.As the Senate chamber prepared for the formalities of a trial this week, new evidence in the case continued to spill out. Lev Parnas, a close associate of Giuliani facing criminal charges provided phone texts and other documents that described the two men’s push for a Ukrainian announcement on Biden, while also telling media outlets that the president “knew exactly what was going on.”On Thursday, the nonpartisan Government Accountability Office, a federal government watchdog, ruled that the White House budget office indeed broke the law by withholding aid at President Trump’s direction.Trump again called the allegations a “hoax” and insisted that he didn’t know Parnas, despite Parnas’ close relationship with Giuliani.”I don’t know him at all, don’t know what he’s about, don’t know where he comes from, know nothing about him.” Trump said.Several Senate Republicans seemed unmoved by the new evidence.”To me, the source of evidence, at best is questionable … The people involved are sketchy at best. I am ready to move on,” said Graham.Added Republican Sen. John Kennedy of Louisiana: “I don’t want America, once the Senate finishes its work to say ‘well, we just got run over by the same truck twice."”House Speaker Nancy Pelosi insisted that Republicans were content in burying their heads in the sand.”They’re afraid of the truth,” she said.Late Thursday, GOP moderate Sen. Susan Collins of Maine put out a statement trying to clarify where she stands on the question of witnesses and new evidence. “There’s been a lot of mischaracterization and misunderstanding about my position on the process the Senate should follow for the impeachment trial,” she said.”While I need to hear the case argued and the questions answered, I tend to believe having additional information would be helpful. It is likely that I would support a motion to call witnesses at that point in the trial just as I did in 1999,” she said, referring to the Clinton impeachment trial, where the question of witnesses was voted on only after opening arguments.”Prior to hearing the statement of the case and the Senators asking questions, I will not support any attempts by either side to subpoena documents or witnesses,” she added.The partisan rancor though was left for outside the Senate chamber, as 99 senators signed their names in a book promising to uphold “impartial justice.” One senator, James Inhofe, R-Okla., was in his home state because of a medical issue involving a family member.Reporters described the room as completely silent as each member approached the book with Chief Justice John Roberts observing quietly.Told to minimize distractions, many senators sat with few materials in front of them. Sen. Mike Lee, a Utah Republican, took a Bible from his desk and began reading. Copyright © 2020, ABC Audio. All rights reserved.