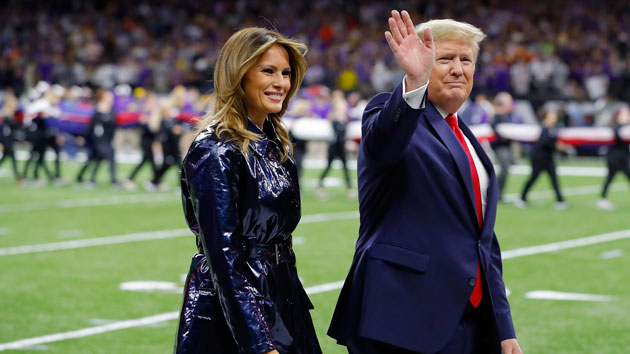 Kevin C. Cox/Getty Images(NEW ORLEANS) — During a ceremony honoring the 2019 “Teachers of the Year,” one in particular stood out.The honoree from Minnesota, Kelly Holstine, chose to kneel during the national anthem at the NCAA football championship game on Monday, where the ceremony took place, “to stand up for marginalized and oppressed people,” according to a tweet she wrote, which included a photograph of her kneeling.”Like many before, I respectfully kneeled during Nat’l Anthem because, ‘No one is free until we are all free,"” she wrote, referencing former San Francisco 49ers quarterback Colin Kaepernick and citing a quote from Dr. Martin Luther King, Jr.Kaepernick protested police brutality against black Americans by kneeling in 2016.President Donald Trump and First Lady Melania Trump were also in attendance for Monday night’s game at the Mercedes-Benz Superdome in New Orleans.Holstine, an English and language arts teacher at Tokata Learning Center in Shakopee, has been outspoken about her activism before.She lead a TED Talk in October 2019 titled “Educators must be more than allies.”In her speech, she advocated for teachers to be willing to leave their comfort zones and “stand up for all of the human beings who are being marginalized or oppressed.””Allies are wonderful and we need them, but it is not enough for educators to just be allies,” she said. “We need them to be advocates too.”In April 2019, she was also one of two teachers of the year who skipped the White House ceremony, according to The Hill.”The words and practices and policies of this administration have been filled with a lot of hate toward the LGBTQ community, so I didn’t feel comfortable in that environment,” Holstine told The Hill.The Council of Chief State School Officers, which facilitates the “Teacher of the Year” program, said in a statement to ABC News that Holstine’s actions hadn’t been coordinated with the program’s organizers.”The Council of Chief State School Officers appreciates the opportunity for outstanding teachers to be recognized on the national stage,” the statement read. “The decision by an individual State Teacher of the Year was not coordinated by the National Teacher of the Year program or CCSSO.”Holstine did not immediately respond to ABC News’ request for comment.She is the first openly LGBTQ teacher to receive the honor, according to CCSSO.Copyright © 2020, ABC Audio. All rights reserved.