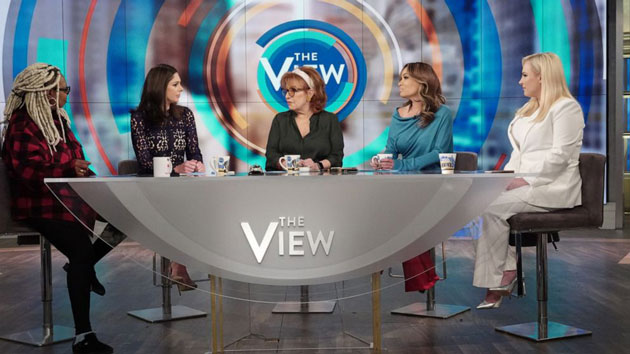 Nicolette Cain/ABC(NEW YORK) — After new audio of a tense exchange between Sen. Elizabeth Warren, D-Mass., and Sen. Bernie Sanders, I-Vt., following Tuesday’s Democratic debate was released, “The View” co-hosts weighed in on the presidential candidates’ confrontation.While on the campaign trail Monday, Warren confirmed earlier reports that, during a private meeting between the two that occurred prior to their 2020 campaigns, Sanders disagreed with her that a woman could win an election against President Donald Trump. Sanders denied the allegations, but the two addressed the claims head-on during the last Democratic debate before the Iowa caucuses on Tuesday.”I don’t want to waste a whole lot of time on this, because this is what Donald Trump and maybe some of the media want,” Sanders said.”Bernie is my friend, and I am not here to try to fight with Bernie,” Warren responded. “Look at the men on this stage. Collectively, they have lost 10 elections. The only people on this stage who have won every single election that they’ve been in are the women, Amy and me.””The only person on this stage who has beaten an incumbent Republican anytime in the past 30 years is me,” she added.Warren approached Sanders on stage following Tuesday’s debate, telling him she thought he called her “a liar on national TV,” according to audio of the contentious interaction released by CNN on Wednesday night.”I think you called me a liar on national TV,” Warren said when she first approached Sanders. The two did not shake hands.”What?” Sanders said.”I think you called me a liar on national TV,” Warren repeated.”You know, let’s not do it right now. If you want to have that discussion, we’ll have that discussion,” Sanders told Warren.”Anytime,” Warren said.”You called me a liar. You told me – all right, let’s not do it now,” he said, turning away.Asked Wednesday if they had any comment on the audio released by CNN, Warren campaign communications director Kristen Orthman responded, “We do not.”The Sanders campaign also declined to comment.On Thursday, “The View” co-hosts reacted to Warren and Biden’s post debate exchange.“If anybody was wondering if Elizabeth Warren could take on a man in power, she showed you how to do it,” longtime co-host Joy Behar responded. “I don’t worry about her with Trump. She can handle herself.”Sunny Hostin said Warren “stuck by what she has said all along. She believes that Bernie Sanders told her he does not believe that a women can be president — can win this election.”“I love it,” Meghan McCain said of the candidates’ tense exchange. “I really respect straight shooters in life. In general, people will say things to your face, not just go behind your back. And her staff and his staff have been feuding, I respect the debate stage, she knows she’s mic’d, she knows she’s on TV in front of millions and millions of people.””She’s a political animal,” McCain added. “I didn’t know she had it in her. I kinda love it. I’m kind obsessed with this. Call him out.”

Every episode of ABC’s award-winning talk show “The View” is now available as a podcast! Listen and subscribe for free on Apple Podcasts, Google Podcasts, TuneIn, Spotify, Stitcher or the ABC News app.