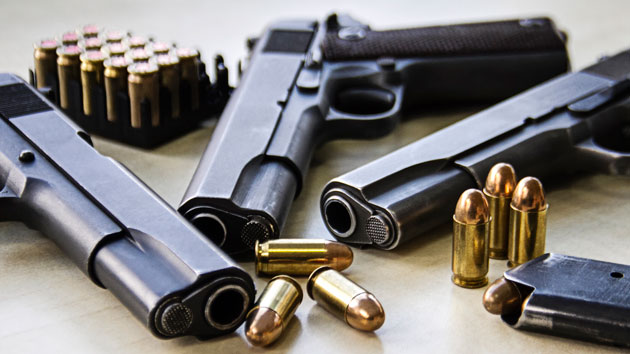 Bytmonas/iStock(WASHINGTON) — More guns were found and detained from passengers or in carry-on bags at airport security checkpoints across the United States in 2019 than recorded in agency history, according to the Transportation Security Administration.The agency found 4,432 firearms at these checkpoints — a 5% increase from the previous year, the agency reported on Wednesday. Of the weapons discovered, the press release said 87% were loaded. Nearly 40% of those were found with a full round in the chamber, the TSA press release said.“The continued increase in the number of firearms that travelers bring to airport checkpoints is deeply troubling,” TSA Administrator David Pekoske said in the press release. “There is a proper way to travel safely with a firearm. First and foremost, it should be unloaded.”He added, “It should be packed in a hard-sided locked case, taken to the airline check-in counter to be declared, and checked.”TSA has set strict laws prohibiting passengers from bringing firearms aboard planes. They do, however, allow weapons with proper permits to travel in checked baggage, requiring that they are unloaded and packed in locked and hard-sided cases, with the ammunition stowed in its original box.Passengers who carry legally are also subject to local and state gun laws wherever they land.TSA officials detected these firearms at 278 airports nationwide last year. The press released named five cities where the most firearms were detected at checkpoints: Atlanta, Dallas-Fort Worth, Denver, Houston and Phoenix.The airports with the highest number of gun seizures in 2019 were:

The airports above were also on TSA’s list for 2018.Hartsfield-Jackson also set the record for most firearms detained in one month — 34 were found in May 2019.The checkpoints experienced a rocky start to 2019, as the United States was in the midst of one of the longest government shutdowns in history. The rate of unscheduled absences at airports throughout the country spiked, and security screening lines grew, forcing travelers to often wait longer than an hour — sometimes missing their flights.The Atlanta airport reported a breach of security in early 2019 — unrelated to the shutdown — when a passenger traveling to Japan successfully brought a gun through security and on to a Delta Airlines flight. The gun was not discovered until the passenger told Delta authorities what he had brought “upon arrival” in Japan.TSA also reminded travelers that individuals who are caught with firearms at airport security checkpoints are subject to federal civil penalties of up to $13,000.ABC News reached out to the agency for comment on next steps. Copyright © 2020, ABC Audio. All rights reserved.