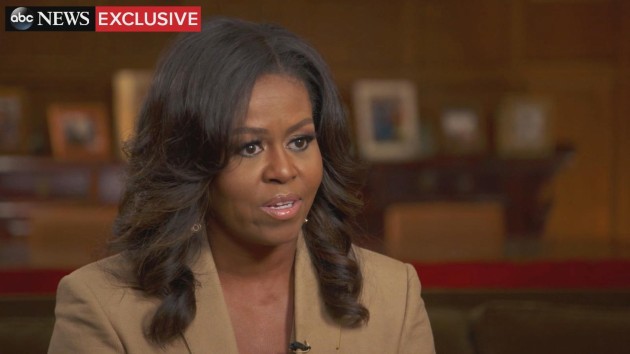 ABC News(NEW YORK) — Michelle Obama kicked off her 56th birthday Friday with a sweet message from her husband, former President Barack Obama. “In every scene, you are my star,” Obama wrote to his wife on Twitter. “Happy birthday, baby!”Along with the message, Barack Obama shared a series of four photos of the happy couple — married for nearly 30 years — posing with each other.

In every scene, you are my star, @MichelleObama! Happy birthday, baby! pic.twitter.com/hgMBhHasBj

Michelle Obama is celebrating her 56th birthday one month after being named the “most admired woman” in the world for the second year in a row in a Gallup poll.The former first lady, a mom of two, is also gearing up for the Grammy Awards later this month. She is nominated in the best spoken word category for the audio version of her best-selling memoir, Becoming.The bestselling book turned into a world tour for Obama, with stops in major arenas around the globe. Michelle Obama was interviewed by high-profile women including Sarah Jessica Parker, Reese Witherspoon and Oprah Winfrey.Last month, Michelle Obama released a guided journal that is meant to accompany her memoir.In writing Becoming, Michelle Obama said she hoped to inspire the next generation to become whomever they aspire to be. “I think that young people are the future,” she told ABC News’ Good Morning America co-anchor Robin Roberts in 2018, ahead of the book’s release. “And if my story, my journey somehow gives them hope — that they can build a powerful journey for themselves and that they can own their voice and share their story, that that’s part of what makes us great. If I played a role in that for some young people comin’ down the line, then … I’ll feel good about it.”Copyright © 2020, ABC Audio. All rights reserved.