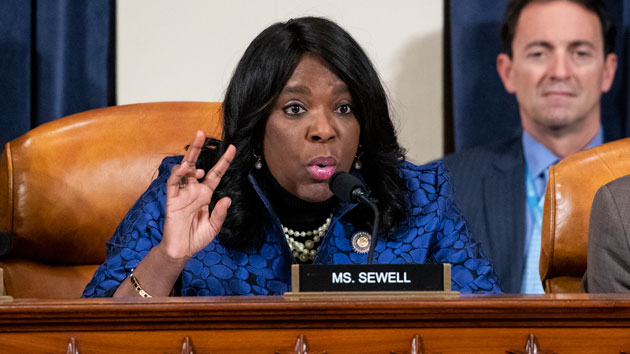 Samuel Corum-Pool/Getty Images(WASHINGTON) — Former Vice President Joe Biden earned the endorsement of Alabama’s lone Democratic U.S. House member Friday morning, Rep. Terri Sewell, the 11th member of the Congressional Black Caucus to back Biden’s presidential bid and another sign of his strength with a key constituency needed to win the party’s nomination: African-American voters.Sewell, the first African-American woman ever to represent Alabama in Congress, was courted by a number of 2020 Democrats, including Massachusetts Sen. Elizabeth Warren, who traveled to Selma with the congresswoman in April to promote her plan for affordable housing.Sewell’s endorsement was timed with Martin Luther King Jr. Weekend, where she will appear with the former Vice President at an event in South Carolina, and gives Biden a boost in a key Super Tuesday state.“Donald Trump is the biggest threat to Dr. King’s legacy! I believe that Joe Biden is the best democratic candidate to beat Trump and, therefore, protect the causes central to the life’s work of Dr. King,” Sewell said in a statement announcing her support.Biden currently leads the Democratic 2020 field with endorsements from the powerful Congressional Black Caucus, and was outmatched only by California Sen. Kamala Harris before she ended her presidential bid in early December.The endorsement comes as a Washington Post/Ipsos poll conducted earlier this month showed Biden with an entrenched lead over his other Democratic rivals with African-American voters, a group whose support he will need to both earn the party’s nomination and defeat President Trump in November.The poll showed nearly half, 48%, of black Democratic-leaning voters voters say they are siding with the former vice president, while 20% support Vermont Sen. Bernie Sanders and 9% support Warren.”For most Democrats, they are looking for a candidate that can be President Trump and Vice President Biden is perceived by most Democrats, and particularly African Americans, to be the candidate who could most beat Trump,” said Fredrick Harris, a political science professor at Columbia University, with a focus on African American politics.Advisers to Biden have consistently cited the former vice president’s ability to build a broad coalition of support as evidence he is the candidate best suited for the Democratic nomination, as no candidate has secured a position at the top of the ticket without gaining a majority of support from African American voters since 1992.The struggle to chip away at Biden’s support among black voters in part led both Harris and New Jersey Sen. Cory Booker, two of the party’s most prominent African-American competitors for its presidential nomination, to end their bids for the White House, and still plagues another top contender, South Bend, Indiana Mayor Pete Buttigieg.In the Washington Post/Ipsos poll, only 2% of black Democratic-leaning voters are backing the former U.S. Navy Intelligence officer.Earlier this month Buttigieg picked up his first endorsement from a member of the CBC, Maryland Rep. Anthony Brown, who also now serves as the campaign’s first national co-chair.With the departures of Harris and Booker from the 2020 race, only two other members of the CBC have endorsed candidates currently running: Massachusetts Rep. Ayanna Pressley is backing Warren, while Minnesota Rep. Ilhan Omar is backing Sanders.While Biden’s record on race relations and civil rights has come under more intense scrutiny during the 2020 race, the former vice president and longtime Delaware senator often touts his experience as a former public defender and early advocate for voting rights, and names Dr. King and former Attorney General Robert Kennedy as his two political heroes.“I’m extremely proud of my record on civil rights. That’s why I have more people in the African-American community supporting me than anybody else. That’s why the president picked me. I make no apologies for my record on civil rights. It’s been as good or better than anybody in politics,” Biden said during an education forum last month in Pittsburgh, Pennsylvania, referencing the fact that then-candidate Barack Obama, the nation’s first African-American president, picked the then-senator to be his running mate. Copyright © 2020, ABC Audio. All rights reserved.