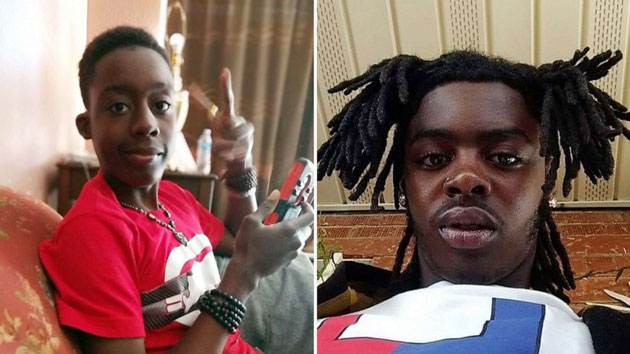 Courtesy Humphrey Family(PHOENIX) — A 19-year-old Phoenix man ended up in a local hospital after he was aggressively taken into custody by police who said they mistook him for his older brother.Dion Humphrey was arrested on Jan. 10 by officers in the Phoenix Police Department’s Special Assignments Unit who had seen him from unmarked cars.Humphrey’s older brother, Kahlil Thornton, 20, had been accused of armed robbery and attempted murder in a Jan. 9 incident, police said. The victim from that incident was in intensive care as of Friday and the individual’s survival “was very questionable,” said Sgt. Tommy Thompson, a police spokesman.Two of the four suspects from the Jan. 9 incident were taken into custody that night, while police said they’re still pursing the other two.”Humphrey’s brother is one of the outstanding suspects,” Thompson told ABC News. “The two brothers are about 10 months apart in age and are very similar in appearance.””Dion told investigators that people often mistake he and his brother for twins,” Thompson added.Thompson didn’t name Dion’s brother, who police said lives with Dion at their parents’ home.Rev. Jarrett Maupin, a spokesperson and adviser for the Humphrey family, told ABC News on Friday the older brother in question has not lived with his younger brother in more than 10 years and that have different mothers.”The older brother is over 6 feet tall, has long dreadlocks, tattoos — totally different from Dion, and the department knows this,” Maupin said. “This is not a case of mistaken identity, as they are leading people to believe.”Thompson said Dion’s brother “may not live there all of the time,” referring to the parents’ home, but that “he often goes to the residence” and that evidence of the Jan. 9 crime was recovered from there.Complicating matters is that the Special Assignments Unit is not required to wear bodycams.Said Maupin: “When they are looking for a white suspect in a white neighborhood, they don’t operate like this. Did they even say, ‘Stop! police!’? We’ll never know.”Dion Humphrey was struck with bean bags as three officers subdued him using a flash grenade, Maupin added.”He’s in bad shape right now,” Maupin said.Dion Humphrey has chronicled the aftermath of the incident with family and friends from his hospital bed via Facebook posts. He captioned in one video that the police did not ask him any questions or allow him to speak during his arrest.Police said Dion Humphrey did not comply with their commands and tried to flee.”Had they stopped to talk to him, they would have realized Dion is developmentally disabled. He has the mentality of a child,” Maupin said.Dion Humphrey is about 90 pounds, and he suffers from sickle-cell anemia and asthma, his father, William Humphrey said on a GoFundMe page.”I remember everything that had happened to me and I was crying why did it happened to me?,” one entry in Dion’s Facebook page Jan. 12 states. “When I look back at what happened my vision gets bigger and blurry?.It’s scary to know that i could have died I’m so happy I am in the hospital recovering my wounds and pain.”Dion Humphrey was detained for more than seven hours, Maupin told ABC News. After he was released, his parents took him to Phoenix Children’s Hospital, where he remained hospitalized as of Friday.The investigation, Thompson said, is ongoing.Copyright © 2020, ABC Audio. All rights reserved.