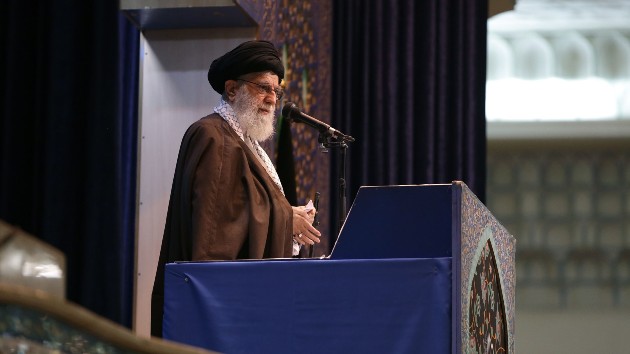 Iranian Supreme Leader Press Office / Handout/Anadolu Agency via Getty Images(TEHRAN, Iran) — Ayatollah Ali Khamenei said Friday that Iran’s attack against a U.S. military base was “a blow to the U.S. image as a superpower.” Iran’s supreme leader, who was leading prayers in Tehran for the first time in eight years, used the occasion to praise the Islamic Revolutionary Guard Corps’ Quds Force and its former commander, Gen. Qassem Soleimani, a close ally who was killed earlier this month in a U.S. drone strike in Baghdad airport. “[A] Day of Allah means when you witness the hand of God in incidents, the day that tens of millions in Iran and hundreds of thousands in Iraq and other countries came to the streets to honor the blood of the Quds Force commander, shaping the biggest farewell of the world,” Khamenei said. “Nothing can do that except of the powerful hand of God.” “These are the turning points of the history,” he added. “The IRGC’s reaction was a military blow, but even beyond, it was a blow to the U.S. image as a superpower.”Iran attacked two U.S. military bases in Iraq in the early hours of Jan. 8, five days after the killing of Soleimani. No one was killed in the attack. Eleven American service members, however, were recently flown out of Iraq after sustaining head injuries in the strikes, the U.S. military announced. As public sentiment in Iran turned against the U.S., with millions taking to the streets to mourn Soleimani’s death, the news was soon sidelined when a Ukrainian passenger airplane crashed in Tehran just hours after the missile attacks, killing all 176 passengers and crew members on board. Despite the initial denial by Iranian aviation officials, officials in Tehran later admitted its air defense “unintentionally” fired missiles at the airplane..But at Friday Prayers, Khamenei said that the plane crash and subsequent protests were being used by Iran’s enemies to distract from the IRGC victory in striking against the U.S. bases in Iraq. “The plane crash made our enemy happy as much as it saddened us,” he said. “They used it as means of questioning the IRGC and the Islamic Republic system. But they made a mistake.” Khamenei also criticized the U.K., France and Germany’s attempt to apply pressure on the regime to adhere to the Joint Comprehensive Plan of Action (JCPOA) nuclear deal as another means to distract from Tehran’s perceived victory in its strike against the U.S. The three counties jointly announced this week that they “trigger the dispute mechanism” of the nuclear deal, which amounts to a formal accusation of Iran violating the terms of the agreement.In response, Iranian President Hassan Rouhani warned during a televised cabinet meeting Wednesday that soldiers from the three European countries “may be in danger.”Unless a resolution can be reached between the parties within a period 60 days, the three countries, who are still signatories to the deal despite the U.S. pulling out, could end up returning all of the pre-deal sanctions on Iran. Earlier this month, President Donald Trump moved to de-escalate the crisis in the aftermath of the Iranian missile attacks, saying that “Iran appears to be standing down” and the “American people should be extremely grateful.” However, Tehran still blames Washington for withdrawing from the nuclear deal unilaterally in May 2018, and the government has denied any possibility of a new round of negotiations unless all of the nuclear-related sanctions on the country are lifted. “The enemy’s negotiation is contaminated with fraud and deception,” Khamenei said. “The gentlemen behind the negotiation table are the same as the terrorists in the Baghdad airport. This is the same iron hand, but in [a] velvet glove.” Copyright © 2020, ABC Audio. All rights reserved.